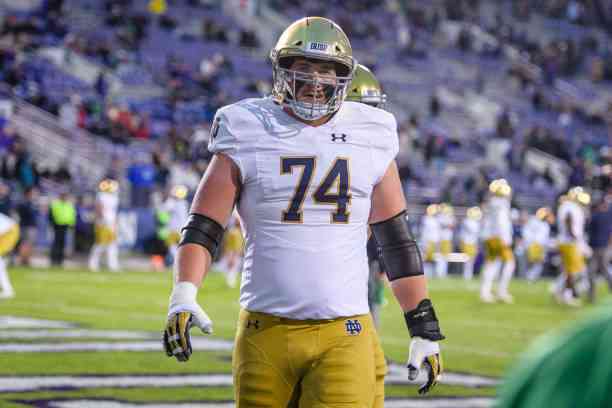 Once the main prospects of the First and Ten Big Board have been thoroughly reviewed (at least, those that, in our opinion, have ample first-round possibilities), we bring you the brief analysis-profile of the rest of the prospects on our board, from So let’s complete an X-ray as wide as possible of the players that we will see parade throughout the three days of the 2021 NFL Draft.

In terms of our Draft Glossary, I define it as:  Prospect who masters intangibles. A leader on the offensive line who has the foundations to block in the air and ground game. A fact that defines this, especially with the air attack, is that the last capture he allowed was in 2018 (his sophomore season ). Very solid and with the possibility of being selected in the first round.

Like:  That he can deal with inside defensive linemen and with linebackers beyond pass rushers. He takes the defender out of range to reach the quarterback, knows how to find an opponent and knows how to react if he looks lost . He knows how to enhance his pushing technique, win the “hand battles” against opponents, and eventually send them to the ground.

He has versatility and value to block like RT, although it is as LT that he performs best. He manages to block more than one player in the same play, in addition to his game awareness being very good at reading how opponents enter and where they will seek to attack (along with identifying when someone enters unpredictably). He has great lateral strides and is patient when it comes to holding down defenders.

I don’t like it:  some of his techniques could lead to punishments (especially holdings). Although he is very good at these “hand battles”, he tries to exaggeratedly defeat such an opponent, becoming predictable and eventually defeated. He’s not specifically elite because his ceiling isn’t that high, and he can have a hard time blocking fast, dynamic pass rushers in the NFL.

His X Factor heading into the Draft:  Nowadays, it is highly valued that a prospect has had his four years in college, and Eichenberg has that. This is especially offensive, since he was polishing his mistakes season by season (with three seasons as a starter). He is an excellent worker, with the ability to start from the first snap of the 2021 Season and progress on that (staying constant in his strength).