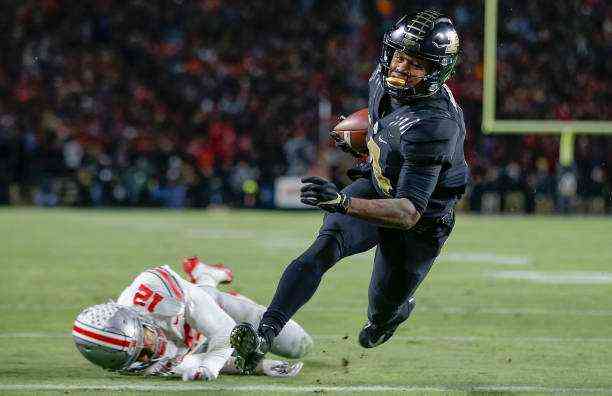 It is becoming more and more common in the NFL to see receivers with the style of WR Rondale Moore, who play in the slot and can generate yardage in different ways like a Swiss Army knife on offense. That is why this prospect, who will be taken in the second round of the 2021 Draft and even with a chance of coming out at the end of the first, will immediately fit into the league no matter which team selects him.

Moore began his college football career in 2018, which ended up being his best season with Purdue. In that year he finished with 114 receptions, 1,258 yards, 12 TD; 213 yards, and 2 TDs on the ground. That earned him the Ritcher-Howard Receiver of the Year for the best WR of the Big Ten (conference), Thompson – Randle The Freshman of the Year for the Big Ten’s best rookie, and be part of the first All-Big Ten team and of the best team in the nation. Finally, he also received the Paul Hornung Award for the most versatile player of the season.

In 2019 and 2020, their seasons were limited. In the first, he suffered a leg injury that left him out for most of the season, playing in just 4 games in which he recorded 29 receptions, 387 yards, 2 TDs. Already in his last year in college football, a discomfort in his lower back limited him to playing in 3 games, in which he accumulated 35 receptions, 270 yards, and 1 TD on the ground.

In addition to being a catcher, he has a lot of value as a punter and kickoff returner. Likewise, he is an explosive, dynamic player who dominates the slot (where he plays practically all the time). He is brutal gaining yards on the sides of the field, especially when he receives short passes before the first and ten. His movements are his best weapon, coupled with the fact that he becomes someone lethal running routes with his speed.

It has an extraordinary balance, capable of staying upright no matter how many first hits it receives. He can defeat the best CB of the opposing team when they mark him in the slot and his body extension allows him to fix bad shots from the QB. With his footwork, he confuses defenders and helps him break tackles and his strength as a player.

He can extend plays, being great at gaining yards. He is the typical playmaker who can turn anything into something quite important. His acceleration is magnificent to reach the space in which the defender is not, beating him and leaving him behind. Finally, he has a good ability to catch catches on medium / long passes with the defender on top and in tight spaces.

He goes so far as to exaggerate the attempt to extend the play, which could lead to a loss of the ball or considerable loss of yardage. The fact that he has played only seven games between 2019 and 2020 is a warning, because with two different injuries, he is someone prone to injury. Likewise, its use could be limited since it only plays in the slot, and once it is in motion before the snap, it could be predicted what will happen.