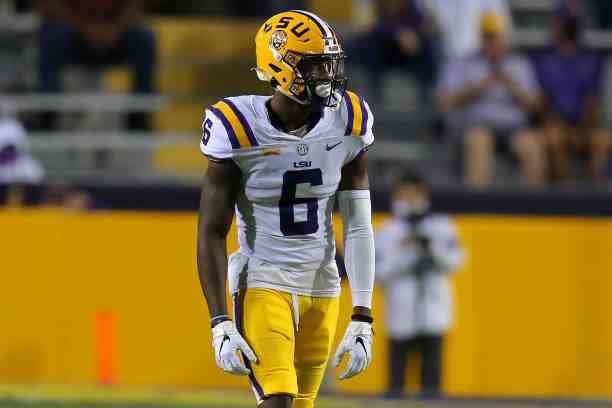 Once the main prospects of the First and Ten Big Board have been thoroughly reviewed, we bring you the brief analysis profile of the rest of the prospects on our board, from So that we complete an x-ray as wide as possible of the players that we will see parading throughout the three days of the 2021 NFL Draft.

In terms of our Draft Glossary, I define it as:  a true sleeper. Being from the same college as WR Ja’Marr Chase (LSU; one of the top three receivers in the 2021 NFL Draft), he overlooks what a good prospect he is. He takes full advantage of his size to get receptions, since when he faces a defender fighting for the ball, he usually comes out ahead.

I like:  his good hands to secure passes, his acceleration when he goes to face the defender and his exit once the play begins. A receiver who gives himself space to get reception and opens a window for the QB to throw the ball at him. It can be aligned in the slot, it is imposing thanks to its size, and it is good against the personal cover.

Strong receiver, difficult to tackle, can fix a pass that was thrown with less force than required and with the good technique when facing the defensive back. A very good potential, because each season at LSU, he grew in terms of numbers in addition to being a touchdown machine (23 TDs in 3 seasons with the Tigers). Reminds me of WR DeVante Parker (Miami Dolphins).

I don’t like: his initial speed on some plays, which he has to regain with acceleration that requires extra effort. Once you start attacking the CB on plays that will go deep, he is not very aggressive and is completely dependent on the positioning of the ball (and his strength in catching passes with the defender on top). He is not the best at generating yards after the reception and gets to drop some balls that could be in the process.

His X-Factor for the Draft: although it may sound repetitive, taking advantage of his size so much to get plays in favor of his team makes him special. Especially since no matter how close the defender is, who is covering him or what defense scheme he is facing, he is going to get reception 65% of the time. Despite the deep talent in this class of receivers, he is undoubtedly one of the top 10 players at the position.

It could be taken, without being surprising, in the last picks of the first round. However, he will most likely be selected in the second round.

Tampa Bay Champion! Tom Brady Conquers His Seventh Super Bowl And These are His Best Plays

Mac Jones, The New Patriots Qb Who Does Not Use His Real Name In His Daily Life