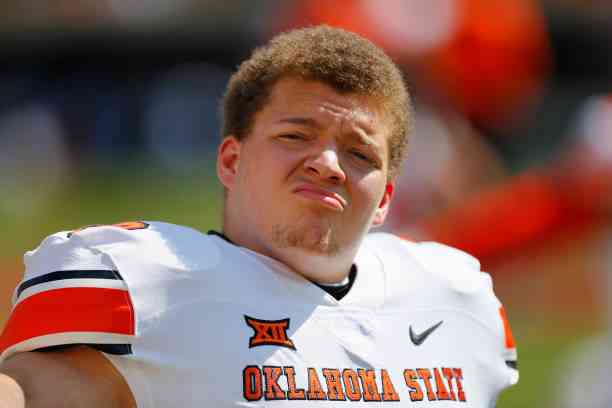 Once the First and Ten Big Board’s main prospects have been thoroughly reviewed (at least, those that, in our opinion, have ample first-round possibilities), we bring you the brief analysis-profile of the rest of the prospects on our board, such as Teven Jenkins. So we are going to complete an X-ray as wide as possible of the players that we will see parading throughout the three days of the 2021 NFL Draft.

In terms of our Draft Glossary, I define him as: an offensive tackle with a lot of strength, light feet, and plays with such aggression that he seems to be always angry. He is a player who knows either side of the line in the OT position and also has experience as a guard.

He played 35 games as a starter in his four years at Oklahoma State, but seven came in his final year of eligibility because he chose not to continue and be ready for the NFL. He is one of the players who has grown the most in the 2021 Draft process and could well attract some teams’ attention in late first round selections or early in the second day.

I like: the ability he has to dominate his rivals to such a degree that he does not rest until he makes them hit the ground. He is quite agile for his weight, a characteristic that allows him to go to the second level to cancel linebackers and safeties. He is a broad and powerful type of physique, which he uses quite well to protect and block in a way that makes it look easy.

The experience he has as a guard will give him a plus because he could start his NFL career on the inside of the line. He is very intelligent and knows how to transfer it to the field of play.

Dislike: his arms are short for OT, which supports the theory that he could be a professional-level guard. It depends a lot on your upper body, and sometimes that strong players, like the ones you will face in the NFL, can overcome it. He must use his legs better when receiving the attacks of the defenders. He relies more on his power than on technique.

His X Factor heading into the Draft: The immediate need of many teams to improve the offensive line will give Teven Jenkins a plus because it takes little to become a good starter in the NFL. If they are evaluating him as OT, they probably want him for the right side, where he could be a second round player. Instead, we will likely see him at the end of the first round to show off immediately as a guard.

I see him coming out at pick 17 with the Raiders or 18 with the Dolphins for very early. Later I see the Colts, Steelers, and Chiefs as a good possibility to make him a first-round player. If he slips into the second round, it could be for the Eagles, the Bengals, or the Cowboys.