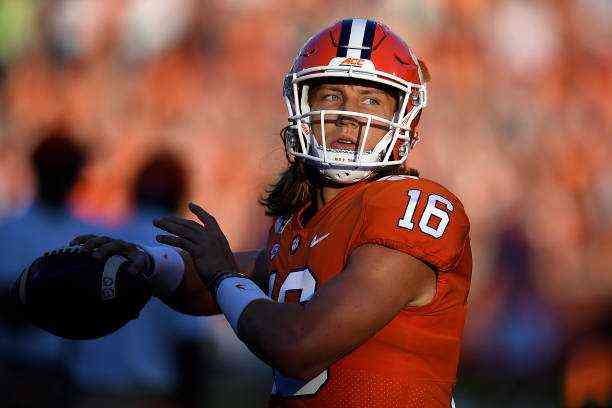 Without a doubt, QB Trevor Lawrence is one of the top five prospects not only in the 2021 NFL Draft but as a quarterback in the last twenty years. Everything points to (and it should be) that he will be the first selection of the next Draft, capable of turning around a franchise with as many problems as the Jaguars.

He began his collegiate career when he entered Clemson as a five-star prospect at the national QB position. In his first year with the Tigers, he took the title. He replaced QB Deshaun Watson to give the university a second consecutive title by defeating Alabama (44-16). From there, he made the leap to become one of the best prospective quarterbacks in recent years.

In 2020 he raised doubts because he lost in the College Football Playoff semifinal against Ohio State, but he remained the best prospect in the position and the potential first pick of the next Draft.

What are its qualities?

Able to do it all for the demands of the position. He perfectly manages the protection bag and knows how to read defenses, either in option plays (if he keeps the ball to run or hands it to the RB) or to change the play itself. He is a mobile quarterback, which can be used as a facet to design a play for him on an individual level or a resource in his style of play.

It is very precise in passing when it is moving, it has an enviable precision in deep passes and to place them in small spaces. Thanks to the chemistry he finds with his receivers, he perfectly understands their routes and knows when to throw the ball at them. He is a very patient player with extraordinary vision and is very fierce on the field and difficult to tackle.

When he is in the red zone, he becomes an elite QB, because he knows how to score either by passing to the corners or in drawn plays so that he gets to TD. Finally, he is extraordinary at taking the pass with speed once the snap has been thrown, and he is very good at dealing with pressure from defenders.

What are your areas of opportunity?

He reaches such an excess of confidence that he exaggerates in his decision making, a situation that we especially saw in the 2020 Season (5 INT). Finally, after having won that National Championship in 2019, he was not the most effective when he has been on the big stages. That is to say: the level of play that we see in general is not always reflected in the most important games.

Trevor Lawrence reminds me of …

If I had to name someone – because his style is quite particular and unique – Aaron Rodgers would say. He’s capable of reading defense, changing plays at the line of scrimmage, and has that mobile ability as a thrower.

I would select it if it were …

Jacksonville Jaguars. No choice. It has to be the first pick of the 2021 NFL Draft in a team that has a new General Manager and a new head coach in Urban Meyer, who knows college football perfectly. He is able to turn this franchise upside down so that it returns to compete, from the outset, in the AFC South.

Do not miss the profile of the 100 best prospects of the 2021 NFL Draft in First and Ten. You just have to enter this article and click on the Scouting Report option of the player you want to review in the table.

He Was Even Handymen! Tom Brady Does Not Remember The Launch of Vince Lombardi