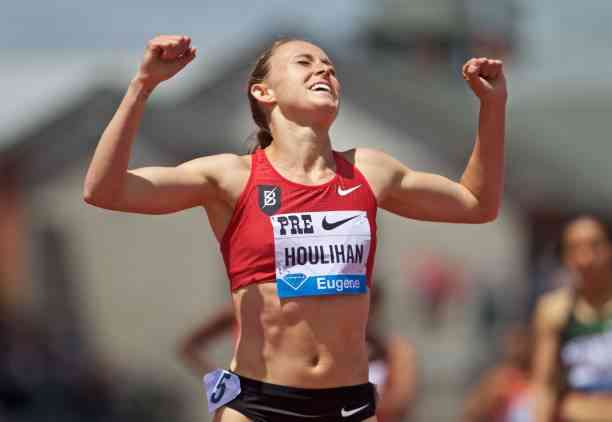 A 4-year punishment faces runner Shelby Houlihan, she tested positive in a doping test, argues that it was for a burrito that she ate.

Shelby Houlihan is one of the best distance runners in the United States, she was at the Rio 2016 Olympic Games and is one of the Olympic medal contenders for Tokyo 2020, but she faces a difficult situation in her career.

Shelby Houlihan’s 4-year suspension fell for a positive anti-doping test, the substance for which her test came out positive was nandrolone. So her participation in the Tokyo 2020 Olympic tournament is in danger from this punishment.

This substance is an androgen and anabolic steroid that helps increase muscle mass, with the 5ng/ml of nandrolone found in Shelby Houlihan’s body, in an out-of-competition test carried out in December.

Houlihan learned the news at a press conference this past Monday, and on Tuesday, June 15, the TAS confirmed the 4-year sanction, which will begin on January 14, 2021. The athlete defended herself, arguing that it was a meal that caused the positive for nandrolone.

A burrito (net?), Who was eaten 10 hours before the test and from a food truck near her place of residence in Oregon was the culprit of the positive, argues Shelby Houlihan. Her attorney, Paul Greene, explained that pork can serve as a source of nandrolone.

The words of Shelby Houlihan and her team

After learning about the TAS resolution that would keep her away from competitions for 4 years, Shelby Houlihan shared a bit of her feeling on her Instagram account: “I feel completely devastated, lost, broken, angry, confused and betrayed by the same sport that she loved.

“I want to be very clear. I have never taken any performance enhancing substance. And that includes what I am accused of. I’m not interested in cheating. I don’t do this for the accolades, the money, or to let people know my name. I do this because I love it“, were some of the words of Shelby Houlihan.

Jerry Schumacher, coach of Shelby Houlihan’s team also commented on the sanction: “I was notified that Shelby had registered a positive drug test in December 2020. The positive test was for a substance called nandrolone, something of which neither Shelby nor I had ever heard of.

“The positive test was for an extremely small amount of a substance that, according to studies by the AMA, is known to be present in certain types of pork, less than 12 hours after he ate a truck Mexican food that served pork. I don’t understand how a competent and impartial body could not come to the conclusion that Shelby is innocent.”