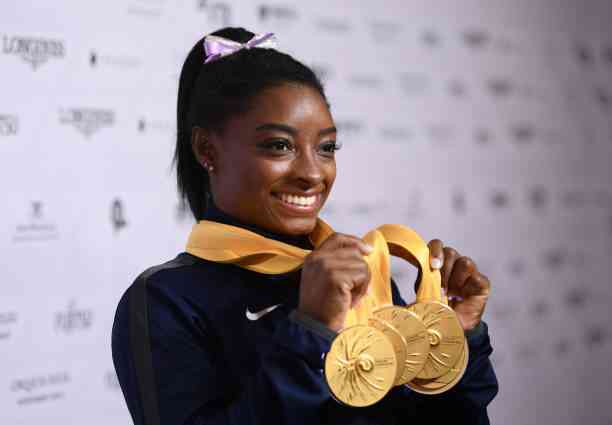 Year after year, Time magazine chooses the 100 most influential people of 2021, and they select characters from all walks of life; from film artists, politicians, opinion leaders, and athletes. In the field of athletes, there were a total of six that appeared on the list, highlighting Simone Biles and Naomi Osaka.

It was an incredible 2021 for the sport in general. Eurocup, America’s Cup, Super Bowl, Olympic Games, and other sporting events marked the history of a year that is recovering from the COVID-19 pandemic and beginning to return to “normality.”

Simone Biles, Naomi Osaka, Suni Lee, Tom Brady, Allyson Felix and MLB sensation Shohei Ohtani. Some of these athletes had great successes in 2021 and others had ups and downs, but their relevance in society is much more important than sporting achievements.

The most influential athletes of 2021 according to Time

The global gymnastics star came to the Tokyo 2020 Olympics as one of the best athletes to watch. Unfortunately, she was unable to perform at the top of her skills, a mental health problem kept her from her best.

However, she participated in some of the events she had scheduled and he hung a solo medal and another for teams. Putting aside sports, revived the issue of mental health in athletes and began to raise awareness about mental health.

The tennis player was one of the first to speak about mental health in sports. She had a controversy at Roland Garros because he did not want to enter the conferences, because the press was an important factor in the subject of her mental health. They fined her and decided to withdraw from the tournament to take care of her health.

She participated in the Tokyo 2020 Olympic Games, but did not have a successful participation. I’m back at the Cincinnati Open, but the importance of Naomi Osaka in 2021 is that she started the issue of mental health in the world of sports and the planet in general.

Becoming the best player in the NFL is no small thing in 2021, Tom Brady got his seventh Super Bowl, and it is an important achievement because nobody has (and we mean teams) had as many championships as the QB – only the Steelers and Cowboys are They approach you with 6 rings.

In a very good time, nobody will be able to match what Tom Brady has done in the NFL, and he still has a thirst for triumph. Although he has nothing to prove, he continues with the goal of adding one more Super Bowl, that is why he returned for the season 2021 with the Buccaneers.

The absence of Simone Biles in gymnastics trials opened the doors to the United States Olympus for Suni Lee, who took gold in the All-Around in Tokyo 2020. At 18 years old and with a future that promises more gold in the Olympic Games, she became the present and future of gymnastics.

A 2021 full of triumphs for the young Suni Lee, who will now close the year with participation in the reality show: “Dancing with the Stars” and preparing for the next Olympic Games in Paris 2024, to which she will arrive as the star.

United States athletics is well represented, Allyson Felix hung a pair of medals at the Tokyo 2020 Olympics and has one of the most successful careers any athlete could dream of and has yet to think of ending.

Allyson Felix plans to retire at the 2024 Paris Olympics, she can retire as one of the immortals in the United States and add a couple more medals to her long list of successes in her career as a hurdler.

The revolution was televised and reached the MLB, few in the big leagues have taken the spotlight like Ohtani. Her quality is more than proven, but she takes it a step forward, because few pitchers have the power to be good hitters, but she does it like no one else in both fields.

She is one of the leading hitters with the Angels and a pitcher who has a careful arm, so chocolates and home runs are what should be of concern to all teams facing the young Japanese.

Carlos Sainz Throws Drive To Survive: “I Was Disappointed In The Ferrari Chapter”