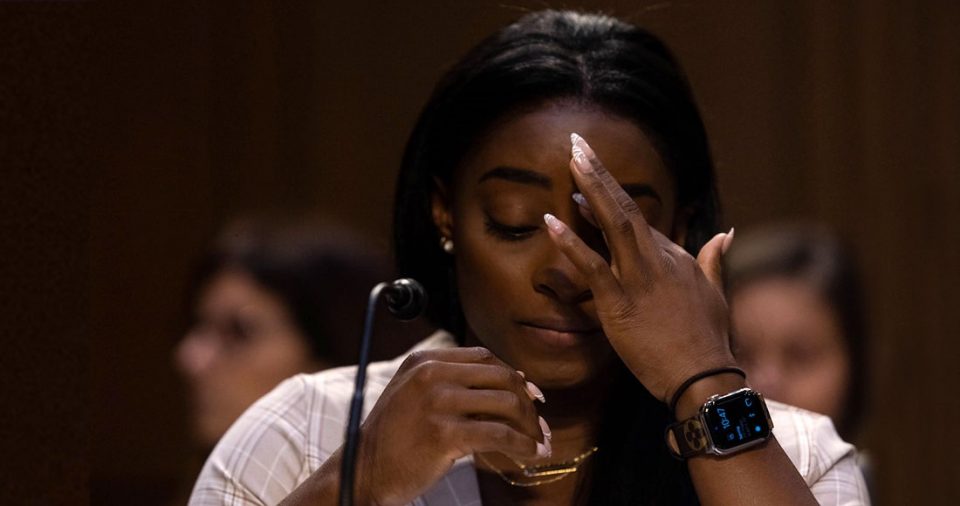 Simone Biles appeared before the United States Senate Judiciary Committee to testify against the FBI investigations.

It has been more than three years since a judge sentenced Larry Nassar between 40 and 170 years in prison for sexually abusing more than 300 young people in his position as a doctor of the United States Gymnastics National Team. However, the injuries have not healed in Simone Biles, and the investigation still has several answers to give.

The United States gymnastics star appeared before the Senate Judiciary Committee of that country. His statements launched a strong attack against the FBI, the United States Olympic and Paralympic Committee, and the gymnastics team for neglecting the first complaints against Larry Nassar.

Why does Simone Biles blame the FBI?

Biles is not the only person blaming the FBI. In addition to Simone, there are other gymnasts who wish to clarify the reasons why the Criminal Investigation Agency of the United States Department of Justice (we are referring to the FBI) ​​took so long to attend to the first complaints of the gymnasts, as well as other negligence during the investigation against Larry Nassar.

There is currently a 119-page document that, after its publication, prompted senators to hold a hearing to investigate how the FBI would act in this situation. That is why Simone Biles, one of Nassar’s victims, was called to testify.

“I blame Larry Nassar, and I also blame the entire system that allowed and perpetrated that abuse. USA Gymnastics and the US Olympic and Paralympic Committee knew the team’s official doctor was abusing me,” said the Olympic multi-medalist.

Biles went to the Senate Judiciary Committee along with other gymnasts, doctor victims: McKayla Maroney, Maggie Nichols, and Aly Raisman.

“I don’t want any other young Olympian or any other individual to suffer the horror that I and that hundreds of others have endured and continue to endure to this day,” said Biles.

What is known about the negligence of the FBI?

In July 2021, a report (the 119-page one) was released by Michael Horowitz, Inspector General of the FBI, who revealed the anomalies of the FBI itself to deal with the case, which caused the abuses of Nassar to continue for several more months.

This report indicates that in July 2015, the first complaints were received from the president and director of the United States gymnastics team, Stephen Penny, before the FBI field offices in Indianapolis. The manager provided the names of three people who were willing to be interviewed, however, the investigation was not formally opened.

At that time, the office was headed by W. Jay Abbott, who is pointed out as one of the main culprits for the negligence.

It was two months later that the first of three people willing to be interviewed were contacted. Still, the interview was not formally documented until February 2017, in a report known as 302. By that date, Nassar had already been arrested for possession. of child pornography.

The identity of the agent who conducted the interview and who at the time made an “essentially false” report is unknown, according to Excelsior. Neither the agent nor Abbott were prosecuted.

Abbott negotiated a seat on the United States Olympic Committee

Jay Abbott resigned from the FBI in 2018 and is also being investigated for another case, because during the investigation, he negotiated a possible job with the United States Olympic Committee, while the investigations against the doctor were being carried out.

“They have failed us, and we deserve answers. It really feels like the FBI has turned a blind eye,” Biles claimed.