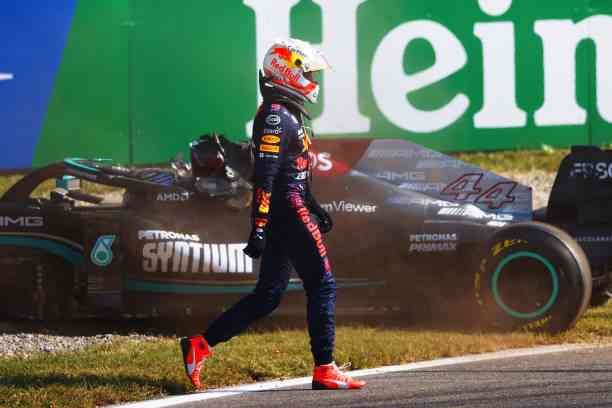 Lewis Hamilton and Max Verstappen star in a legendary battle in Formula 1, and their battles are the subject of analysis and recreation.

The 2021 season will go down in history in Formula 1 due to the intense battle between Max Verstappen and Lewis Hamilton, who in the British Grand Prix and the Italian Grand Prix have been involved in accidents that could compromise the physical integrity of his opponent.

The most recent episode was at Monza, where Verstappen’s Red Bull finished on top of Hamilton’s Mercedes, who was even hit on the head with the rear tire on the right side and were it not for the safety halo as well as the helmet, the Briton would have suffered a severe injury.

The FIA ​​determined a penalty of three places on the starting grid of the Russian Grand Prix, so that if he wins pole position, the Dutchman will start from the fourth box in the race.

The accident will be something to talk about for a long time and will surely be part of the fourth season of Drive to Survive, but also, the mishap has been analyzed elsewhere. Crashlong, a YouTube channel specializing in recreating car accidents, recreated the second chapter of the war between Verstappen and Hamilton.

Was Hamilton to blame?

The channel suggests that Hamilton performed the same maneuver that knocked out Verstappen in Britain, taking a different line of attack when taking the parabolic, the most popular corner at Monza.

The recreation takes as a reference the line drawn by Lando Norris (orange line), who was in front of Hamilton and Verstappen. The McLaren driver takes the first corner close to the pianos (the elevations or edges that are around the curve), and draws a diagonal to attack the second corner, also close to the pianos.

On the other hand, Hamilton (green line) goes almost to the edge of the straight, before taking the curve and already in the curve “it runs wide compared to the normal line,” to close the way to Verstappen (blue line), who borders the edges and this causes the Red Bull to “jump,” get tangled up with the Mercedes wheels and finish up Hamilton.

Other controversies arose after the accident, including the fact that Verstappen got out of the car without worrying about Hamilton. Helmut Marko, a Red Bull advisor, explained that Hamilton was still trying to back up his car to stay in the race when Max got out. “The medical car also saw it and continued on its way.”

He also ruled out Verstappen intentionally hitting Hamilton out of the race to fear the Brit would win. “What nonsense. Mercedes was too slow for that.

Be that as it may, Marko thinks like many of us regarding the closing of the 2021 Formula 1 season. “It will be exciting until the last race.”