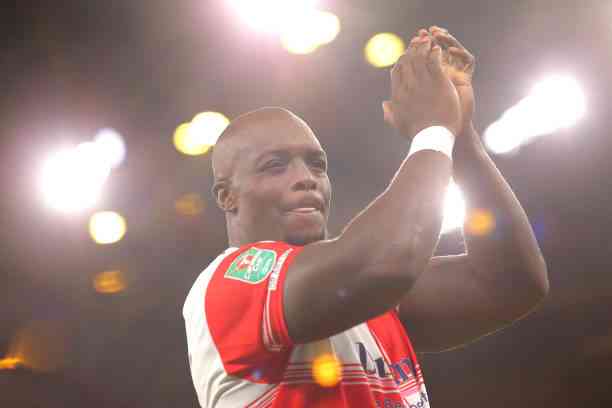 The trajectory of Adebayo Akinfenwa that was forged in the football of Lithuania, continues in England; he promises to play until age 40 or older.

The crack that surprised the world! Adebayo Akinfenwa is 39 years old, a forward for Wycombe Wanderers, and one of the characteristics that the world often notices is that he weighs at least 100 kilos, something unusual for a professional footballer.

His intention is to remain active even after the age of 40, and little by little, he won the affection of millions of fans around the world. Now he faced Pep Guardiola’s Manchester City, and in addition to ensuring that he would appear with him, it is believed that this could be one of his last great games. But his career is much more than that.

In July 2020, he starred in an extremely emotional moment. The Wycombe Wanderers reached the EFL Championship, and regardless of the physical or talk only about the important victory at Wembley, he recalled a very difficult time in his career and life in general.

“Today, God has made possible what seemed impossible. Four years ago, I was practically an unemployed person, but life and football are opinions for me. There are people who have given their opinion about me, but they are just that, opinions. I hope my story shows that the only opinion that matters is your own, “he told Sky Sports.

Adebayo Akinfenwa was referring to what happened in 2016, when his contract with AFC Wimbledon ended. Aware that his stage would not be extended in that club, he asked that if a coach was interested in him, they would contact him by WhatsApp to avoid unemployment. There the Wycombe appeared with a golden opportunity.

The 13 clubs of Adebayo Akinfenwa

In soccer, there are several types of players. Some stay all their lives in the same club, others go through so many that it is impossible to remember them; something like that happens with Adebayo Akinfenwa. The Englishman has played for 13 different teams, including Wycombe Wanderers.

First on the list is Lithuania’s Atlanta, followed by Wales’s Barry Town. From then on, all the clubs are English and the majority of the third and even fourth division:

But when it comes to the Wycombe, everything is more special for Adebayo Akinfenwa. 55 goals, 38 assists, and almost 14 thousand minutes played in five years make this an incredible story and worthy of recognition throughout the world.