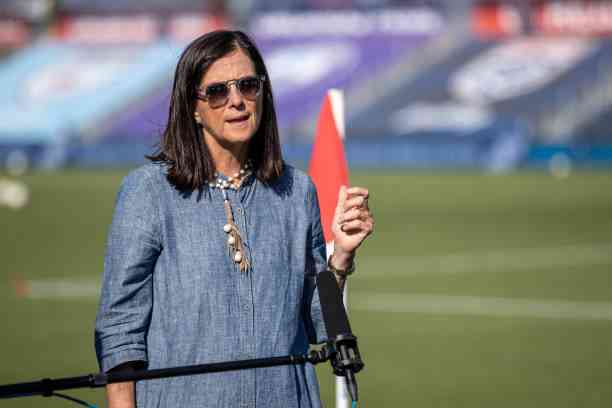 Commissioner Lisa Baird resigned from her post after Paul Riley’s harassment and abuse scandal of some NWSL footballers.

What began as some complaints in the media, today has the NWSL in check. The voices raised by the abuse and harassment committed by technical director Paul Riley seem to be the beginning of a revolution, which has already left strong changes such as the resignation of Lisa Baird.

Now a former commissioner of the NWSL, she accepted her responsibility for the lack of action on the complaints, but the case is bigger than it seems and does not only involve two characters. We tell you:

The pressure generated by the Paul Riley case

Not even a day had to pass for the sports world to turn to the NWSL and the management of Lisa Baird. Once The Athletic published its investigation, outrage prevailed at the actions that did not come from the clubs or the League.

While it is true that this started in 2015 and Lisa Baird came to the NWSL in 2020, the women in this competition got tired of always protecting their assailants and not them or their careers.

Baird had no intention of helping the footballers

Although Lisa Baird served as commissioner for just under two years, it was not only the consequences of other executives shelving the Paul Riley case. She herself became aware of what happened thanks to the emails she exchanged with Sinead Farrelly between April and May 2021.

However, the whole world could realize that there was never any intention to help through those same emails. Before the investigation was published, Baird excused himself in that the files of the first “complaint” were reviewed, and an earlier conclusion was found.

If the answer or their way of acting had been different, also the outcome of this story?

It seems that the NWSL atmosphere was only clouded thanks to Paul Riley, but it is the opposite. In July 2020, Tom Torres stopped being an assistant at Washington Spirit for allegedly looking for new challenges, and later it turned out that he actually made inappropriate comments to some soccer players; now she works with young players.

Craig Harrington was fired as manager of the Utah Royals for being verbally abusive and making comments of a sexual nature to club workers. Today he is the coach of América in the Liga MX Femenil.

Farid Benstiti left his position as OL Reign manager a few months ago. It was said that the reason was inappropriate comments about the physique of several footballers, and when he worked at PSG, a similar situation arose.

The Gotham FC dismissed the CEO Alyse Lahue in July 2021 for violating the anti-harassment regulations of the League.

The constant silence in American sports in general

Having had more than one case of abuse or harassment in less than 2 years is a great sign that bullies are usually covered up. Regardless of whether or not other institutions decide to hire them, Lisa Baird and the NWSL only saw different situations happen and were involved as little as possible.

This ended up taking a heavy toll, as the players got tired of the few actions in their favor. And is that currently, the League only asks that anyone who goes through a situation of this type comes to report it … to be ignored?

The need for new beginnings

In the midst of so much silence, complicity, and the lack of interest in supporting those affected, they themselves are the ones who push to improve the environment in soccer. However, they maintain a constant struggle that seeks to favor the next generations.

Every year, new elements are sheltered, especially young people exposed to these decisions that protect anyone except them.