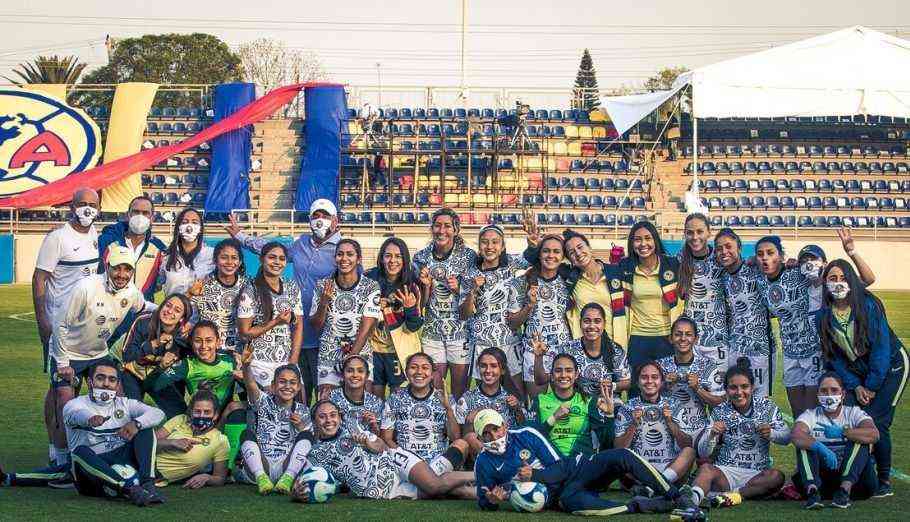 Blue cream day! America won the Capital Classic of the Women’s League and stole the spotlight as we reached the middle of the tournament.

Are the Classics inherited or created? In the days prior to the Capital Classic of the Liga MX Femenil, it was clear that the institutions feel the rivalries as their own and are not willing to lose a match of this type.

América and Pumas have starred in exciting duels in the almost 4 years of the League’s existence. They are all played with the same intensity, and in Guard1anes 2021, the Eagles gave a coup of authority.

Pumas arrived at Matchday 8 undefeated and as the overall leader . However, he found an America desperate for points and took advantage of the second half to come back and annihilate the auriazules.

The scoring opened at minute 39 with a great goal from Liliana Rodríguez, but the complement was for the locals. The University Girls looked distracted and failed to respond to Jocelyn Orejel’s constant attacks on the left wing.

An own goal by Fabiola Santamaría meant the tie at minute 61, and the Eagles party began. Only a minute had passed when Daniela Espinosa took advantage of a rebound, caused by a cross from Orejel, and put Coapa’s team ahead.

Finally, Montserrat Hernández sentenced the Capital Classical of the Liga MX Femenil. The confusion of the Auriazul defense gave an advantage to those led by Leonardo Cuéllar, who reached 15 points and climbed to sixth place on the table.

What happened in the rest of the day?

After the comeback in the capital of the country, the revolutions fell with 3 draws. Cruz Azul and Tijuana were not hurt, Mazatlán surprised Atlas with a 2-2, while FC Juárez and Atlético de San Luis scored one goal per side, both from the penalty spot.

The share of goals in Matchday 8 increased in the visit of León to Chivas. Led by Alicia Cervantes, the Atlético Madrid thrashed and secured themselves to the top of the standings.

‘Licha’ scored 3 times, Anette Vázquez and Isabella Gutiérrez completed the account. On the part of the Esmeraldas, Daniela Calderón discounted, although it was too late to think about a heroic return.

For their part, Tigres met the predictions and beat Toluca 2-0. María Sánchez and Stephany Mayor scored at Volcán, while their staunch rival suffered at Bella Airosa.

Despite being in Liguilla positions, the tournament has been deceptive for the Rayadas. Viridiana Salazar’s goal helped Spanish Toña Is’s Gophers, who are already eighth in the table and looking better and better.

For the second time in almost 4 years, Monterrey had 2 consecutive defeats. Now they fell to Juárez and Pachuca; In the Apertura 2017, the same thing happened on matchdays 12 and 13, against Chivas and Tigres.

Day 8 ended in the Lagunera region, with the duel between Santos and Necaxa. The Centellas got up twice and managed to make it 2-2, but the protagonists were the fouls, since they scored more than 35 in 90 minutes.