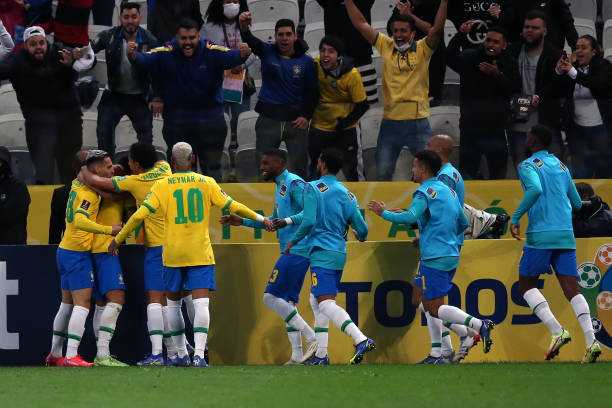 Of 32 places, there are already three teams qualified for the Qatar 2022 World Cup, and we will show you how the road is in each confederation.

We are getting closer and closer to the 2022 World Cup in Qatar, and the 32 places are starting to fill up, as there are already three teams that qualified. In some confederations, the road is halfway, but some countries that will also be in the World Cup can already be outlined.

Qatar was the first guest, it was obvious, the host wins the right to go to organize the World Cup, so we already had the first guest before. Germany were the second team to qualify after their devastating stint in the UEFA tie.

Denmark was the third to qualify for the 2022 World Cup in Qatar. They showed an overwhelming level throughout the UEFA qualifying round.

The third guest is Brazil, after consummating the victory against Colombia, and the next guest in that confederation could be Argentina.

How is the classification in the other confederations?

In our always well-behaved and well-weighted Concacaf, the road to Qatar is just beginning. We have five games to date. The Mexican National Team is positioned as the leader of the classification with 14 points, the United States with 11, and Canada, which is third with 10 points.

Recall that in Concacaf, the first three of the classification go directly to the Qatar World Cup 2022, and the fourth place goes to a playoff in search of a fourth ticket. So there are eight games left, which means the stakes are high.

There is no qualifier or anyone who is close to getting a pass to the Qatar 2022 World Cup, but we can get an idea that the Mexican National Team is heading for a new participation in a World Cup before hostingwell, that host is a saying.

Four teams qualify directly to Qatar 2022 and the fifth place of Conmebol goes to a playoff. Of those direct places, Brazil has already sealed the ticket to the World Cup.

Five places are awarded for the Qatar 2022 World Cup in Africa, so there is still a lot to know about these teams representing the African continent. A qualifier is still in its second stage of playoffs.

There are currently 10 groups, from which the best team in each group will come out; thus, the third round will be born, with which the five guests for the Qatar 2022 World Cup will be known. Therefore, there are two games to go until the second round of the knockout group stage ends.

Algeria, Tunisia, Nigeria, Côte d’Ivoire, Mali, Egypt, South Africa, Senegal, Morocco, and Tanzania are the group leaders and are shaping up to advance to the next round in search of a place in the World Cup.

The World Cup qualifying round in Asia is on fire, it is already in the third and final qualifying round. There are two groups with six teams each, of which the best two in each group will advance directly to the Qatar 2022 World Cup.

The two teams that finish third in each group will play a match to meet the representative of Asia in a playoff for a place in the World Cup. There are 10 games each team plays, and only four have played each, so the qualifiers are yet to be known.

In Oceania, the qualifiers for Qatar 2022 have not yet started, they will start in January, and this confederation is the one with the fewest quotas, and none is direct. He has only half a ticket to the World Cup and has to play his place in the World Cup in a playoff.

To reach that half-ticket granted by the OFC, first the 11 teams have to pass a first-round, that first round will be divided into two groups according to their FIFA classification and will play games all against all for a total of 5 dates, in that the top two teams in each group advance to the second round.

Those who advance will be in a second round, where the four teams will playback and forth matches, with the semifinals to be played in January or March. The winner of this entire classification will be measured in one of the playoffs for the Qatar 2022 World Cup.

In Europe there are 10 groups, some have six competing teams and others five. In these qualifiers, the best of each group will advance to the Qatar 2022 World Cup and the second group will go to a playoff between European teams to meet the 15 European guests.

Of the 10 UEFA groups, there are already three qualified teams, and they are Belgium, Denmark, and Germany, there are still seven direct passes to the World Cup. But none of the groups has a serious contender because they are quite disputed groups, and some important teams will go to playoffs.

Some teams have a couple of games left and only one game for others, so we will meet more guests at the Qatar 2022 World Cup on the next World Cup qualifying date.