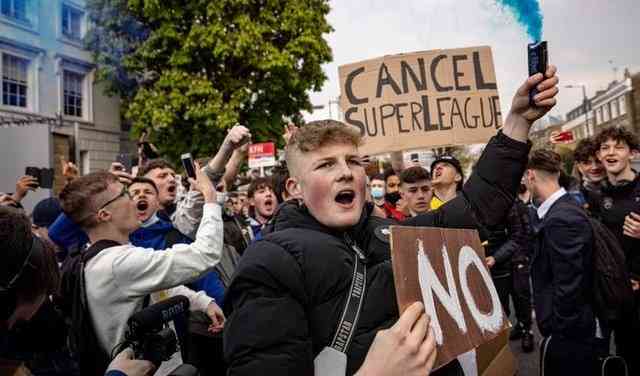 In just under 48 hours, the Super League went from project to catastrophe and here is the chronology of everything that happened with the new tournament.

When football seemed to be recovering from this blissful COVID pandemic – at least as far as Europe is concerned – countries were getting people to return to stadiums in small numbers and with all possible restriction measures. Yes, it was a breakthrough, but on Sunday, April 18, the stability of football in Europe and the rest of the world was in danger.

From the moment the project was presented, the controversy began on social networks, and the responses were immediate, some in favor and others against, mostly against this league which they classified as “classicist” because only some were able to belong.

The idea of ​​a new Super League hit all over the world, and although not much was known about the competition or what its system was, we were only promised duels between clubs of the European elite and greater appeal to the fans.

Little by little, he began to gain more detractors in the world of football and the world in general, the reactions were not only from former footballers, clubs that were not invited and sports organizations. From England, a fierce attack against the Super League began.

The foundations of the new Super League seemed to be collapsing with statements by UEFA president Aleksander Ceferin, in which he was adamantly against this creation, but Florentino Perez, president of the project, tried to calm the waters in a program of TV in Spain.

After the TV broadcast, the Super League left more doubts than answers, and in less than 48 hours, it seems that the new tournament is experiencing its most stunted moments. Chelsea, under pressure from hundreds of fans on the outskirts of the stadium and prior to a Premier League duel, began to gather the paperwork to disengage from the Super League.

Like a snowball, the problems for the Super League grew and before the rumours that not only Chelsea were getting off the boat, but also Manchester City was doing it; There were even reports that also indicated that Barcelona and Atlético de Madrid. And well, nothing, everything seems to indicate that we are closer to the end of this project than a formal beginning.

A Chronicle of a Death Foretold

Florentino Pérez, president of Real Madrid, remained as the representative of all the presidents and in command of everything that had to do with the Super League. The format was simple: 20 teams, made up of 15 founding teams, and 5 invited to the tournament, based on performance from their leagues.

This new Super League would face the Champions League, a tournament that for them was losing strength, and they wanted something more attractive for the new markets, although they would continue to compete in their respective leagues without any problem, or so the organizers said.

Multiple reactions began to be generated on social networks, mainly from fans and part of the press around the world. Even with much lack of information about this new Super League, speculation began. Nothing new.

Some players began to demonstrate against this decision of a minority sector of teams; these former footballers were joined by fans of the same organizing clubs and fans of other teams. The comments were innumerable, and all were shown against this creation.

England And Croatia Dominate: The Goals That Defined Group D Of The European Championship