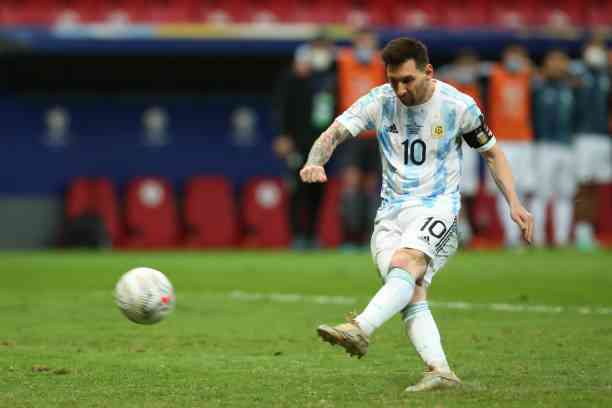 Lionel Messi has lived through a series of difficult moments in the Copa América, ranging from losing finals to rejecting recognition.

It is incredible, but it is not given? One of the pending accounts that Lionel Messi has with the Argentine National Team is to win the Copa America, to consolidate himself in his country, and keep the team as one of the most powerful South American teams.

Since making his debut with the Albiceleste senior team, the Barcelona star has been conspicuous by his absence. Both in World Cups and in the continental tournament, fans demand that the ’10’ be more decisive, since their numbers still leave much to be desired.

But 2021 represents a new opportunity, Argentina will face Brazil in the Final of the competition, and the trophy seems to be closer than ever.

The first appearance of Lionel Messi in the Copa America was in the edition of 2007. Under the technical direction of Alfio Basile, Argentina faced the United States, Colombia, Paraguay, Peru and Mexico to reach the Final undefeated against Brazil.

In addition to being considered in the ideal XI of the competition, Leo scored two goals, assisted in the win over the Stars and Stripes team. Against the Colombians, he provoked a penalty and his best moment came against the Mexicans, with a brilliance of vaseline.

In the end, the Canarinhos neutralized all the Albiceleste, who could do little in the city of Maracaibo to avoid falling to 3-0.

4 years later, the Copa América was played in the country where Messi was born. However, their participation was more discreet, and the team was eliminated in the quarterfinals against Uruguay, a team that finished as champion.

Argentina was led by technical director Sergio Batista and collided with Colombia, Costa Rica, and Bolivia. Leo said goodbye to the tournament without goals, but as the top assistant with 3 in four games played.

The Argentina National Team underwent more changes on the bench, so Lionel Messi and company faced a new Copa América with Gerardo Martino. They shared a group with Paraguay, Uruguay, and Jamaica; they recorded two wins and a draw.

After beating Colombia, Paraguay, and Peru again, the Albiceleste faced the host country in the Final. Everything was defined in penalties, (4-1 in favor of La Roja) with a score by Leo, who did little to help the cause after the failures of Ever Banega and Gonzalo Higuaín.

That edition marked a watershed in terms of recognition. Messi rejected the award for Best Player of the Tournament; yes, he boasted a goal and 3 assists.

In 2016 the 100 years of the tournament were celebrated, and once again, Argentina had to settle for the runner-up. Messi excelled with 5 goals and 4 assists, which led his national team to a new Final against Chile.

The most recent edition of the tournament meant another disappointment for the Albiceleste and Messi. Brazil eliminated them in the semifinals, they were in third place, the midfielder did not enter the XI Ideal and only registered one goal with an assist.

The controversy returned to take center stage at the end of the duel against Canarinha, as Leo exploded against Conmebol by ensuring that the management of the organization favors Brazil.

What Does Liverpool Need to Go Back To Real Madrid And Advance To The Champions League Semis?