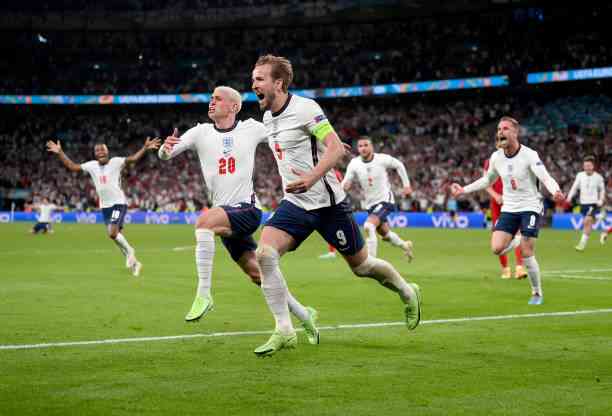 Harry Kane was visited as a hero, despite missing a penalty, but he found the goal and sent England to the final of the European Championship on the rebound.

England and Denmark were looking to reach the final of Euro 2020, the selection of the “3 lions” started as favorites on paper, but the Danes had the emotional moment. Wembley was the perfect setting to meet the second finalist of the tournament.

At the start of the game, both teams were looking to open the scoring, but without so much insistence. It is normal, in the semi-finals instance, it is difficult for any team in any competition to risk too much.

Damsgaard, the man in charge of replacing Christian Eriksen after his unfortunate incident, took it upon himself for several games to pull strings for Denmark. A shot that went wide was his first attempt, and in the second, he would be present on the scoreboard.

Denmark did not like it long, because 10 minutes after Damsgaard’s goal, the response would be reflected on the scoreboard. Bukayo Saka and a great filtered pass, marked the way so that defender Simon Kjaer could not avoid contacting the ball for the equalizer.

For the second half, the intensity dropped. Both teams had their opportunities to increase the score, but neither managed to do so. Schmeichel was the figure with a pair of Denmark saves.

Overtime brought Denmark very worn out, and that with the changes did not improve their football much, so England was looking again and again to make a difference. He found the opportunity thanks to a Harry Kane penalty.

England would be the winner of the match and face Italy on July 11 to lift their first continental tournament. Harry Kane and the company seek glory at Euro 2020.

The goals of the Eurocup semi-final between England and Denmark

England fell victim to their mistakes, Andreas Christansen was fouled outside the area from a free kick they had already scored. Damsgaard would be the collector, and honoring Christian Eriksen’s specialty, he put the ball in the left corner to score one of the best goals of the tournament.

The goal actions in the game would not end here. 10 minutes after Damsgaard’s poem, Harry Kane left the lead and came down to receive a ball, like a playmaker. Kane saw the space and did not hesitate to send the ball in the direction of Bukayo Saka, who with the movement was left alone and put the low center.

Sterling was already licking his whiskers with Saka’s center, but couldn’t hit the ball. Unfortunately, Denmark’s central defender Kjaer was the one who hit the ball into the back of the net.

Overtime England would find their way to the final thanks to a play by Sterling, who received a foul similar to that of Robben against the Mexican National Team in Brazil 2014, and after a review with the VAR, the penalty kick would be credited.

Harry Kane would shoot the penalty very badly, and Schmeichel saved, but he could not keep the ball, and the rebound was left to the English forward, and from the small area, he would not fail for 2-1 and the advantage for the final of the Eurocup.

What Could We Expect From Gareth Bale In The Friendly Against Mexico?