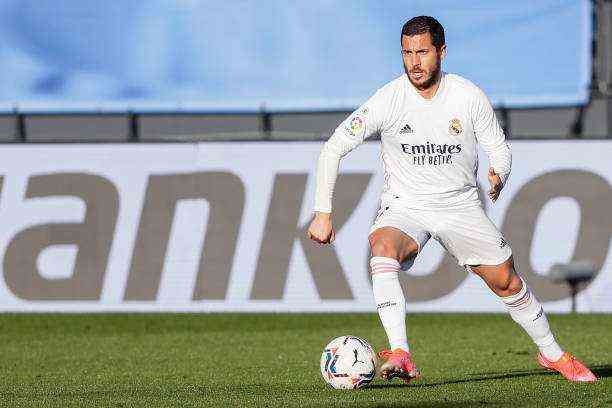 Real Madrid, a club that has forged the history of football, we cannot conceive the history of sport without Di Stefano, Gento, and Puskas, but it also continues to make history thanks to Cristiano, Zidane, and Ramos. Not everything can be positive for the ‘meringues,’ and Eden Hazard is the proof of this.

He shone at French Lille, and his performances led him to Stamford Brigde with Chelsea. In the Premier League, he exploited all his talent to become one of the best players on the planet. The departure of Cristiano Ronaldo from Real Madrid hastened his arrival at Chamartín.

The Santiago Bernabeú and the Madrid fans needed a star to remain motivated after the departure of CR7, and in the role Hazard would come to take the leading role left by the Portuguese, and with the 7 on his back, he began his now difficult path in Spain.

100 million euros paid by Real Madrid for the Belgian star, but the injuries and also the overweight (we understand Hazard, the food is delicious) with which he arrived, have prevented him from showing the best level, well, any level in general.

A new injury for Hazard with Real Madrid

An injury in the psoas will have him out for a month, at least, and confirmed by DT, Zinedine Zidane, who no longer has the Belgian or by mistake for the number of games that remain this season, in addition, apparently the patience of the board and the strategist were exhausted because in a press conference prior to the Champions League, he released a phrase that surely kills Hazard’s aspirations.

“I don’t know if it will be with me or with someone else, but sooner or later, we will see the player who is Eden. I wish it with all my strength, “said Zidane when asked about Hazard’s absence for the match against Atalanta this Tuesday, March 16.

Real Madrid is risking his life in the Champions League, one of the few lives he has left this season, and Zidane, as usual, will have to present his team without Eden, something to which he is already accustomed, because he has lost more games you have played.

One of the games that is lost, is the Classic against Barcelona at the beginning of April, it will not be able to be, which neither can worry the Culé team of facing new weapons, since the Belgian has lost all the Classics that he has could dispute.

How many games has Eden Hazard missed?

54 are the games in which he has not been able to be with Real Madrid, and they will be 55 with Tuesday’s Champions League, plus those that are added until a possible return, if it occurs. Hazard has been injured 320 days, just under a calendar year.

Numbers that are not profitable for a player of 100 million euros, because with Madrid he has been only 27% of the possible minutes in the field. 2,191 minutes out of 7,890 possible, is something that Florentino Pérez will not like at all.

What is it, And Who Will Be in The Conference League? The Third UEFA Club Tournament