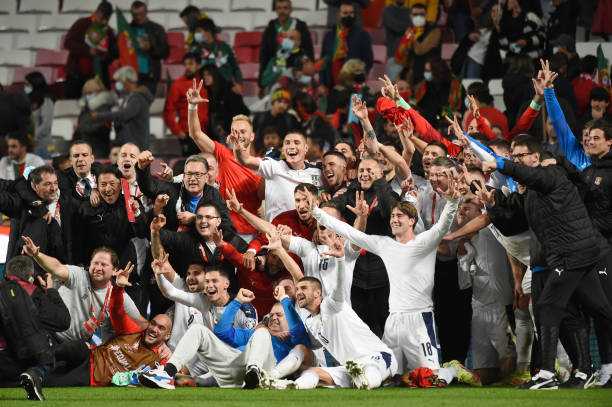 The Serbian players not only qualified for the Qatar 2022 World Cup, but they also won a very juicy financial prize.

The quotas for the 2022 World Cup in Qatar are filling up in UEFA, and this Sunday, Serbia secured their place at the last minute against Cristiano Ronaldo and Portugal as visitors. It was a surprise for locals and strangers, but it was worth it, because they received a premiere.

Sending Cristiano Ronaldo and company to the repechage is not easy, much less if it is done in a match in Portugal. Aleksandar Mitrovic was in charge of putting the goal that would seal the victory for Serbia and go to the Qatar World Cup 2022 direct and nonstop.

This is not the product of chance, because the Serbian National Team made an almost perfect tie and has players in its squad that many European elite teams are fighting, so they are not improvised to do what they did.

The Serbian team took to the field in Portugal with the firm intention of winning and taking the pass to Qatar 2022, that was the main objective, the thing is that they were not only interested in going to the World Cup, but they had a small economic incentive for which to fight.

Before the meeting, a video appeared on social networks and had the President of Serbia, Aleksandar Vucic, as the protagonist. The president was seen on a plane and warned the players of the Serbian National Team that, if they won against Portugal, they would have a juicy financial prize.

How much is the economic prize for the players of the Serbian National Team?

One might think that any financial compensation is enough, the prize of reaching a World Cup is too, but no one can deny that they would like to receive an amount with several zeros in their bank accounts, even when many of the footballers win them.

Let’s stop with things and go to the figures because Aleksandar Vucic promised the Serbian players was one million euros as a financial prize. With that extra amount in their wallets, it was obvious that they would go out onto the court with more than just gain.

With a prize of more than six zeros for each player, it was obvious that they would go out to kill or die on the field in Portugal, but it was not only the economic prize, we reiterate, the players are first class and the victory over the Lusitanians.

Dusan Vlahovic, the starting center forward against Portugal, is one of the most highly-rated young players. He currently plays for Fiorentina, but many teams are already looking for him to change his scene. On the other hand, Dusan Tadic, scorer of the first goal, shines with Ajax.

Sergej Milinkovic-Savic has been one of the best midfielders in Serie A for several years now, Lazio enjoys his talent every weekend, and several teams have also come to ask about him. Milos Veljkovic may not have as much fame as his teammates, but quality, sure yes. He is an established central defender in the Bundesliga with Werder Bremen and is the leader of the Serbian National Team.