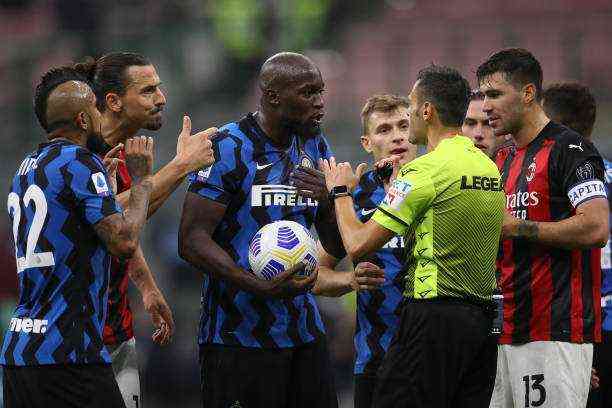 The giants of Milan and Inter were twisted in the first half in a hot classic that Inter beat from behind to get into the Italian Cup semifinals.

Inter qualified for the Italian Cup semifinals on Tuesday by beating their classic rival, Milan, 2-1.

The match was marked by the fight between the Swedish Zlatan Ibrahimovic and the Belgian from Inter, Romelu Lukaku, on the edge of the first half.

It all originated when Milan captain Alessio Romagnoli fouled Lukaku.

On the 9th, he started it against his rival and began to crosswords with all the rival players, except with the Portuguese Rafael Leao, who tried to separate him.

From a distance, the one who reacted by word was Ibrahimovic. Lukaku went to meet him, and they stood head to head. They insulted each other long and hard. Judge Paolo Valeri admonished them to try to settle the matter.

However, the first half ended immediately. And Lukaku wanted to follow her. Ibrahimovic, on the other hand, quickly paraded into his dressing room. A member of the coaching staff had to stop the Belgian who was taken out.

Milan was winning 1-0 because Ibrahimovic had opened the scoring at 31 ‘.

But at 58 ‘the Swede fouled Aleksandar Jolarov, saw a second yellow and was sent off.

At 39, Ibrahimovic is the soul of a team that leads Serie A. In that competition, he has 12 goals in 9 games.

His departure influenced his own and others. Inter came to the smoke to Milan and tied at 71 ‘with a goal from Lukaku, from a penalty.

In added time, Danish Christian Eriksen gave Inter the victory with a goal from a free-kick.

In the semifinals, the only instance of the contest that is played in a round-trip regime, Inter will collide with Juventus or SPAL, who play this Wednesday.