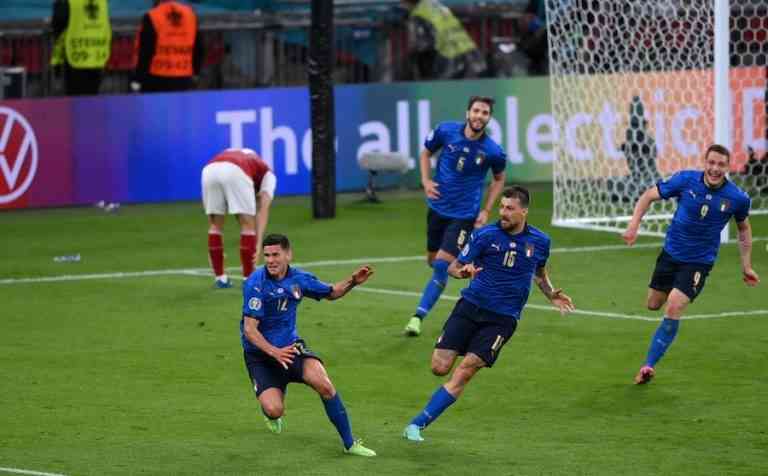 Italy and Austria had a dramatic game at Wembley, and it was the first of the Eurocup to go into overtime. Italy and Austria gave us one of those dramatic matches, in which the favorite was subdued by the “weak” on the Wembley pitch, where finally the Azzurra found the key in overtime thanks to Federico Chiesa, who did a genius in the first overtime, while Matteo Pessina was in charge of giving the lunge.

For Austria, this was already a historic match, as for the first time, they entered a phase beyond the groups and left a good image after a 120-minute fight against a team that had not conceded goals so far in 2021.

The Italians, creators of the catenaccio, suffered with their ‘invention’, as Austria was dedicated to defending, so that almost the entire game was played in the first quarter of the Austrian court, who closed spaces with up to 10 men.

The Austrian team opted not to receive any goal and to make Italy the first in the entire Euro with some counterattack or in a set-piece and thus had found the first goal of the match, however it was correctly annulled by the VAR for an out of place.

It was until minute 94, already in the first overtime, after a technique lesson from Federico Chiesa, Juventus player, who in the area received a ball from Leonardo Spinazzola, which fell as he could, between face and chest, to then remove the mark by accommodating the ball with the sole of his right shoe and without thinking he shot with the left.

Chiesa became Juventus’ best signing last season, and in the Turin team, he coincided with Gianluigi Buffon, who was his father’s teammate at Parma more than 20 years ago.

Italy’s second goal came before the end of the first extra period thanks to Matteo Pessina, who completed the pass to the Quarter-Finals and left a brave Austria lying down, who could not withstand the attacks of the Azzurra beyond 90 minutes.

However, Austria died in the line, as Saša Kalajdžić cut the distance before Donnarumma’s courage, as the goal spelled the end of the 1,130-minute streak with no damage to the goal.

What is the prize in the Quarterfinals?

With this result, another game of high stature awaits us, as Italy will face the winner of the match between Portugal and Belgium, which are part of the group of favorites to win the tournament.

Why Would Mesut Ozil And Eva Longoria Be The New Owners of Necaxa?