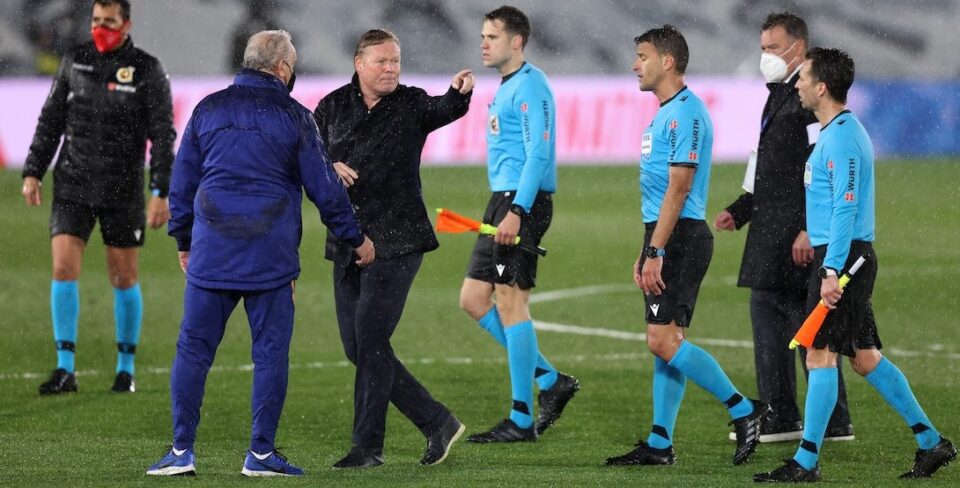 Ronald Koeman went from being an interviewer to an interviewer, and when he did not get the answer he was looking for, he left the interview after the classic.

Ronald Koeman ended up extremely upset after the defeat against Real Madrid, which ended a streak of 17 games in a row without losing, in addition to sending the Catalan team to third place in La Liga, but in addition to the result, the helmsman showed furious at the work of the referee, Gil Manzano.

Near the end of the game, the Barcelona players went with everything to the whistler for not scoring an alleged penalty on Martin Braithwaite, who threw himself to the ground after contact from Ferland Mendy.

Once the match was over, the helmsman was interviewed and the strategist made reference to the penalty, to such an extent as to explain how he saw the play from the technical area.

“It is a very clear penalty,” said the helmsman, who questioned the use of VAR, because for that play, the whistler did not check on the screen. “We have to accept it and shut up. I already said what I think. I don’t know why there is VAR in Spain”.

After these statements, the interviewer became an interviewee, since the Barcelona helmsman asked the reporter if the move had been a penalty. “Is it a penalty?”

As the journalist limited himself to saying that in the end “the referee decides”, Koeman turned around and left in the middle of the interview.

Another who came off the bench directly to face the whistler was Gerard Piqué, who had no activity in the match since he came out of an injury, and went with everything to the refereeing body after the final whistle to claim the play of the penalty and the little time added.

Due to the storm, the whistler suspended the game for just over two minutes to fix team connections that allowed him to communicate with the VAR, and despite the 10 changes in the game, he added four minutes. The defender had to be removed from the field by Barcelona staff.

Why is Raul Jimenez’s Protection Different From Cech’s And What is Its Function?