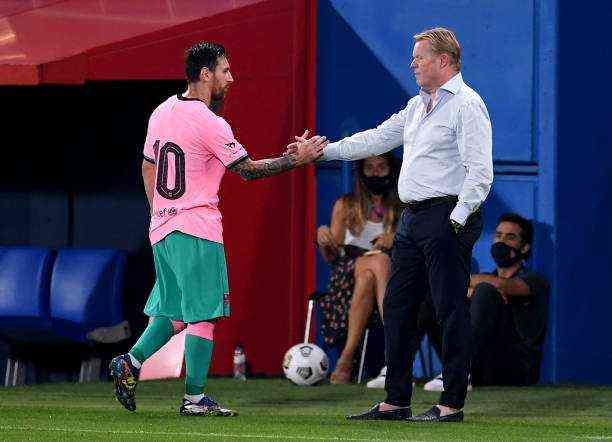 Ronald Koeman spoke of the continuity of Lionel Messi at Barcelona starting next season, and assured that he felt hopeful that Leo would make the decision to continue, although he is not confident about it, given the precedents.

Ronald Koeman opened up about his relationship with Lionel Messi, the Barcelona Football Club’s great star, and his continuity in the project for the next season. The Dutch coach said he was not sure that the Argentine star would decide to continue at Barça in the summer of 2021, although he trusts that this will be the case.

In an interview with The Athletic, Koeman spoke of the circumstances that could have led Messi to stand up and request his departure from Barcelona last summer. “He was not happy to be in a team that lost 8-2 to Bayern Munich in the quarter-finals of the Champions League. Of course, he was angry, he wanted to leave the team, “said the coach. “It was a difficult moment because he is still the best player, but he was angry about some situations at the club,” he added.

Koeman had to act as a forced mediator, although the movements were made between the club and the player as he reveals. “First of all, what I said to the club was: ‘Okay, it’s not my problem. It is a problem between the club and Leo Messi. And you have to figure it out. ‘Finally, the club told me: ‘We are not going to transfer him. It stays. ‘It was a difficult moment for Leo, but he finally accepted it,” says the Dutchman.

Messi and Koeman could have a talk, the content of which is revealed by the Barcelona coach. «I knew I had some problems with the club, and I was out of it. I said to Leo:’ I’m very happy if you stay. If not, it is your decision, and it is what you have to handle with the club. If you stay, you will be part of the team, and that will be your position to bring out the best in yourself. ‘

“I spoke with him at his house before we started the season, I made plans with him, and he was very enthusiastic. Little by little, he accepted that situation. And look at how he’s playing in recent weeks; he’s very involved in the club, in the team. But nobody knows what will happen in the future, “he added.

“I’m enjoying being his coach; if you look at his qualities every day in training, it’s incredible. I still do not see Leo Messi with another shirt that is not the Barça one, “Koeman completed, who is not clear on Messi’s continuity. “I’m not sure, but I’m hopeful because he’s still a great player, and he keeps winning games for the team.”