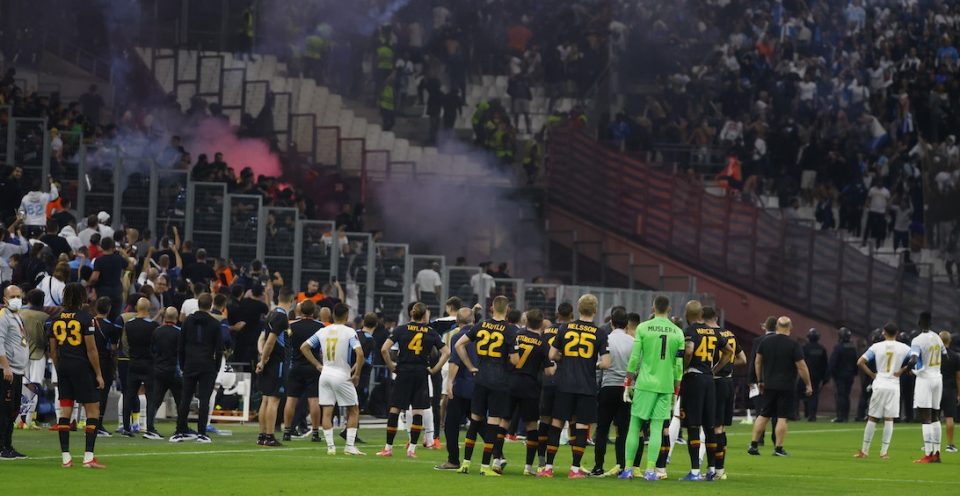 The match between Olympique de Marseille and Galatasaray was suspended for a few minutes due to attacks between fans.

The Europa League match, between Olympique de Marseille and Galatasaray, was suspended moments before the end of the first half due to disturbances in the stands, between fans of the two teams, who began to attack each other with pyrotechnics.

These types of scenes are already constant in French football in its league tournament, so the situation is already beginning to be worrying in the stadiums of that country, and it is not the first for Marseille. Now the riots have reached an international level. UEFA could sanction both Marseille and Galatasaray in the coming days.

What happened between Marseille and Galatasaray?

After half an hour of the game, fans of both teams began to attack each other with flares and firecrackers, which caused explosions that loved the attention of the players and the whistler, who decided to stop the game for more than five minutes.

The Galatasaray ultras were located in one of the corners of the Marseille stadium, relatively close to the header where the French team ultras are located, so somehow, this made it easier for both parties to get hooked.

Players and coaches approached the area, on the court, to ask the fans not to stop their attacks.

Before they had met against PSG

The attacks between the two fans drew particular attention, since before the match, followers of Marseille and Galatasaray had gathered to sing songs against PSG, which for this season benefited from the Financial Fair Play format in France to sign all of them. The stars could, including Lionel Messi, Sergio Ramos, and Gianluigi Donnarumma.