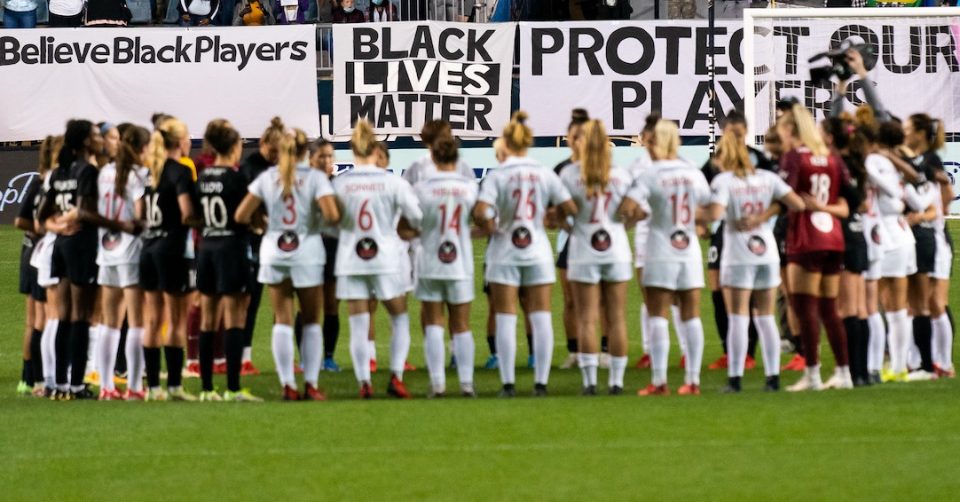 All NWSL teams protest six minutes into the resumption of the tournament over the abuse of Paul Riley.

NWSL activity was suspended during the first weekend of October, as part of protests against the abuse by coach Paul Riley and the fact that complaints about it were ignored for six years. Five days later, the ball rolled again in American soccer, although the protests continued.

The activity on the field was activated with the match between Gotham and Washington Spirit, which marked the trend of the next matches to demonstrate solidarity in the football union, not only against abuses, they are from the system itself ignored complaints.

The game began with its original protocol, however, the game stopped seconds before reaching six minutes, and both the starting players and substitutes of each team met in the center of the field for 60 seconds and this dynamic is replicated in all the matches of the day.

The fact that the game is stopped at the minute has to do with the six years in which the person responsible for the abuses in the American League was kept silent and to some extent, covered up.

Fans stood up throughout the 60 seconds of applause or showing banners to support the soccer players, and although the refereeing body is not part of these expressions in the center of the field, they have recognized the movement and have been involved by calling for the suspension of the match. In the case of the game between Gotham and Washington, the whistler applauded from a distance.

“The teams will stop playing in each of the games tonight at 6 minutes. The players will join in solidarity in the central circle for a minute in recognition of the 6 years it took them to Mana, Sinead, and all those who fought for too long to be heard”, it was warned in statements published on social networks.

A little context to understand the case?

Meleana Shim, Kaiya McCullough, and Sinead Farrelly are the three people who denounced coach Paul Riley, who abused them in 2015, when they were part of the Portland Thorns, and the case came to light thanks to The Athletic investigation.

The complaints and investigations into this situation forced the resignation of Lisa Baird, as commissioner of the NWSL, because although she arrived at the position in 2020, she had knowledge of the case at least since the month of May.

This scandal accompanies the case of the abuses in the gymnastics team of the United States and the belated and hindered intervention of the FBI in the case of Larry Nassar.

The Words Of Dani Alves That Excite Barcelona: “If They Give Me A Couple Of Hours I’ll Go For Messi”