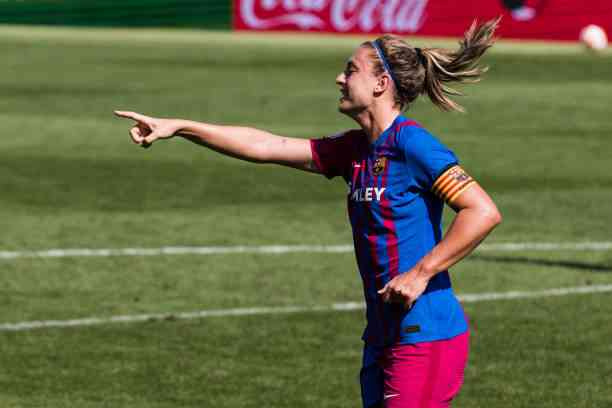 Crazy! The Spanish Alexia Putellas led the 8-0 victory that Barcelona gave Valencia on Date 3 of the First Iberdrola. According to UEFA, chosen as the best player of last season, she proved once again that her quality is of another level with a hat-trick in just 5 minutes.

That the Spanish League is too small for the Blaugrana team is no secret. Last year they crushed anyone who crossed their path and added to their showcase the first treble in the history of the women’s squad.

However, the Barcelona board is not satisfied and goes for more trophies thanks to a squad worthy of envy. As if that were not enough, the doors of La Masía Femenina were opened, which aims to train more players such as Alexia Putellas and company.

The hat-trick that Alexia Putellas scored in 5 minutes

When it comes to Alexia Putellas, nothing is no impossible. Barcelona defeated Valencia 1-0 from 23 minutes, but what was to come could not predict even the best of seers. From the 27th minute to the 31st, the attacker of the Spanish National Team did her own thing all over the pitch.

Putellas herself built the play of her first goal: she received the ball in the half moon, opened to the left wing, and crossed with her left foot after mistakes and little pressure from rival defenders.

Seconds later, Alexia Putellas gave us a painting worthy of framing for the remainder of the campaign. She had barely crossed the midfield when she noticed that goalkeeper Enith Salón was in the lead, and a long shot with vaseline included was sent that ended in the back of the net.

Around the 31st minute on the clock, the incredible hat-trick was consummated. Caroline Graham appeared on the right wing with as much time and space as possible. The Norwegian winger focused on the boundaries of the small area, where number ’11’ gave a master class on how to finish with the head.

Due to her spectacular present, thousands of fans have wondered why Alexia Putellas was not chosen for the FIFA video game with other figures such as Sam Kerr of Chelsea. But we have no doubts that the Spanish will continue to shine in every tournament she plays.

It also points to a new World Cup with Spain, in Australia and New Zealand in 2023.

Costa Rica Is Beaten! The Pre-Olympics Tri Is One Triumph Of The Olympic Games