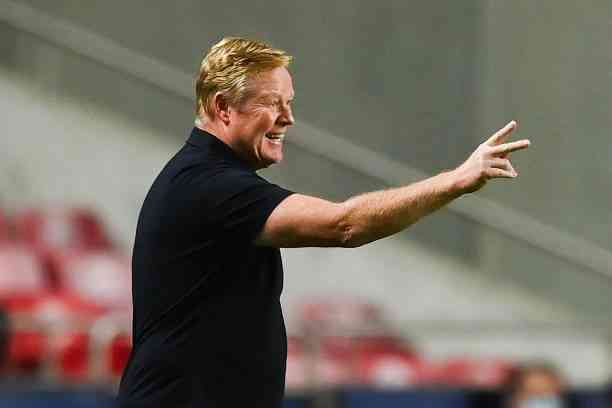 After the bad moment that Barcelona lives, the board could have some names to replace Ronald Koeman as the coach of the team.

Halloween has not yet arrived, and things are horrifying at Barcelona, ​​because when they get a victory, it seems that they take one step forward and each defeat, three steps back. The fall against Benfica in the Champions League, not only exhibited the team, but Ronald Koeman.

The Netherlands strategist is one of the main points of the whole team and not thanks to the defeat against Benfica, for several months there has been talking that he is not the ideal coach for Barcelona and in Catauña, they begin to give names that could replace DT.

Undoubtedly, the bad moment that Barcelona is experiencing is not 100% the fault of Ronald Koeman, because mainly Lionel Messi and Antoine Griezmann, the two players with the highest quality in the team, left. The players who came to reinforce the squad are not of the quality of those who left.

The only advantage that Barcelona has is that the young players who are on the team can make all fans dream of a bright future, although the presence of the Catalan club is a real nightmare.

According to Diario Sport, Joan Laporta, president of the culé team, has four candidates on the table to replace Ronald Koeman – here we tell you the money they would have to pay to do so – and we will explain to each of them.

The DT options of the Catalan team

A history of the club and who knows the insides of the team, Xavi Hernández has not hidden his intentions to one day direct the club of his loves. In addition, it has an advantage over its competitors, and that is, currently against Al Sadd and has an exit clause from the team totally free, if it is only against Barcelona.

He does not have as much experience as DT, that could be one of his disadvantages, but if anyone knows what the Catalan team needs, it is him. As a former player trained at the Masía, he could also help the youth players of the first team to make the leap in quality with the Catalan team.

Current technical director of the Belgium National Team, he is one of the strong options to lead Barcelona, ​​but unfortunately for the Catalan team, Bob has a commitment to the Belgian team in the Nations League, which would complicate his signing.

Roberto Martínez’s experience as DT is mostly in the Premier League, as he led Swansea City, Wigan Athletic, and Everton, before taking the Belgium National Team in 2016. With the Belgian representative, his highest achievement was third place in Russia in 2018.

The Italian midfielder has one of the great advantages: he does not have any contract with any club, so it would facilitate his arrival when the board makes the decision on a new hire and is one of Joan Laporta’s candidates.

Pirlo finished his job as Juventus manager at the end of last season, he doesn’t have as much experience as DT, but he has a couple of titles in his showcase. He won the Coppa Italia and the Italian Super Cup with Vecchia Signora.

A South American for Barcelona’s bench, let us remember that the latter did not do as well as expected, and we are talking about Gerardo Martino, but the ‘Doll’ has shown with River Plate a lot of consistency and hunger to win championships.