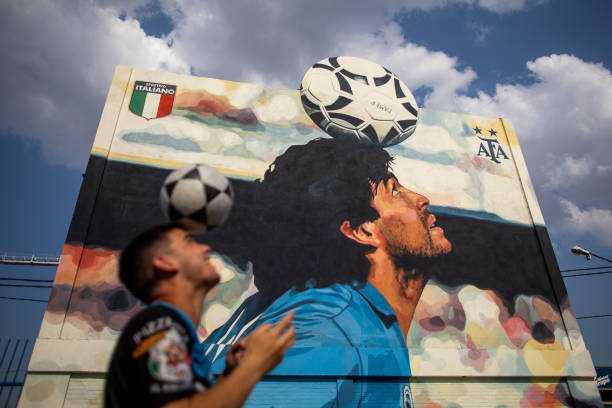 The 61st birthday of Diego Armando Maradona caused Argentina and the world, in general, to make the fields a party to remember him.

Diego Armando Maradona was, and remains, one of the greatest figures in world football, so his birthday is a special date in the world of sport. In 2021, the former footballer of teams like Boca Juniors and Napoli would have turned 61.

His story has been told in different ways. The most recent is on behalf of Amazon Prime Video with “Maradona: Sueño Bendito”, but the life of the Argentine star is still present in the hearts of millions of fans who pay tribute to him in a thousand and one ways.

The whole world remembered Diego Armando Maradona on his birthday

The first tribute for Maradona’s 61st birthday was held in Argentine soccer. Day 19 of the men’s First Division began with Racing vs Defensa y Justicia, which moved all the fans who gathered at the Presidente Perón Stadium.

The footballers of both teams came out to warm up with shirts that had the face of the country’s legend stamped on them. Even the captain’s badges featured his silhouette and the phrase “Diego Armando Maradona – 1960 – ∞” was projected on the screens of the building to highlight that his memory will be eternal.

This will be repeated in all the games of the weekend. In addition, at minute 10 there will be a pause to fill the stadiums with applause with the song “La Mano de Dios” in the background.

The murals stand out on the streets of your country

Art is always present in the world of soccer. Diego Armando Maradona is an inspiration on and off the court, so his birthday becomes the ideal pretext for creativity to flow.

The streets of Argentina become small monuments through its walls. Local artists took the opportunity to create different works and fans of ’10’ imitated their movements at every opportunity.

The ‘Maradonian Church’ organized a ceremony

For some fans, soccer is not a sport or a passion, but a religion. Something similar happens with a group in Rosario that took center stage during Maradona’s birthday. They call themselves the ‘Maradonian Church .’ Yes, they assure that the historic player is their God.

“It is the movement that has been paying homage to him since 2001 and that we do not make fun of the Catholic Church, because the referents are Roman Apostolics. We have two gods: one of the heart and the other of reason. One is Christ and the other is Diego. If we say that soccer is a religion for Argentines, God is Diego, “explained one of its founders to Infobae.

For them, October 30 is known as Christmas. For that reason, an annual ceremony is held in different places; this year it was Mystic Plank. As if that were not enough, in Mexico there is already one of these ‘Churches’.