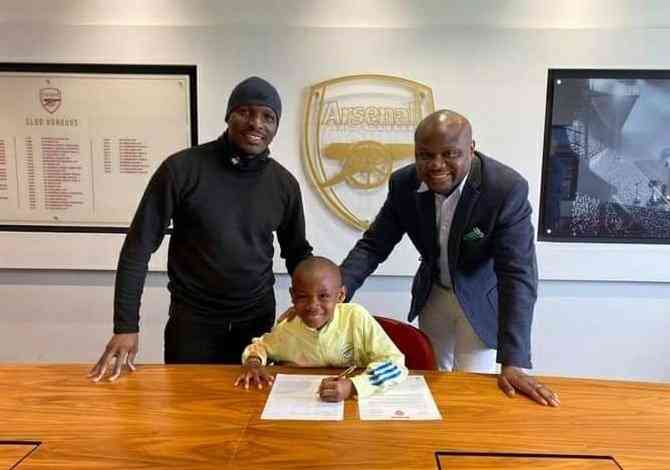 Things are not so good at Arsenal, but the future may be bright with the addition of 10-year-old Leo Messo to their academy.

Things at Arsenal seem to have lost their way, the team is far from European positions, they lost the semi-final of the Europa League and now not even in the FA Cup things were given to them, that is why they began to reinforce the squad with Leo Mess.

If they thought that the Argentine star could reach the London team, they are very wrong, we are not referring to Lionel Messi, whom they tried to bring in in the days of Arsene Wenger, without success of course, but they did sign Leo Messi.

Leo Messi is not a player with great experience or known worldwide, as he is only 10 years old, so he will come to reinforce the youth squad at Arsenal. Messo hails from the African country Kenya and will join the team’s academy.

The youth signed with one of the teams that works best with young footballers, because for several years and we go back to the Wenger era, they have worked well with lower divisions, and the examples are more than clear.

Arsenal’s need to have better players in its not too distant future, as it will be the first time in several years that the team does not qualify for European competitions and that it does not win any title and the fans, after the Super League problem, ask that the owners sell the team .

The Arsenal quarry, cradle of talent

Throughout history, Arsenal, one of the best teams in England, has had players created in its academy and who reach the forefront of world football. That is why for a long time, they were competitive in the championships they played, those times seem so distant.

There are examples to give and to lend, from the goalkeeper who now defends the Juventus goal, Wojciech Szczęsny; to defenders Tony Adams and Ashley Cole, midfielder Ray Parlor and forward Andy Cole, one of the best players of the 90’s.

But they are not the only talents they have developed, the Mexicans have been well represented, and we are not referring to Carlos Vela either. Currently, Marcelo Flores is in the lower categories of Arsenal, wasting his talent, and his sister, Tatiana Flores, also started with the Gunners, although already in exchange for a team.