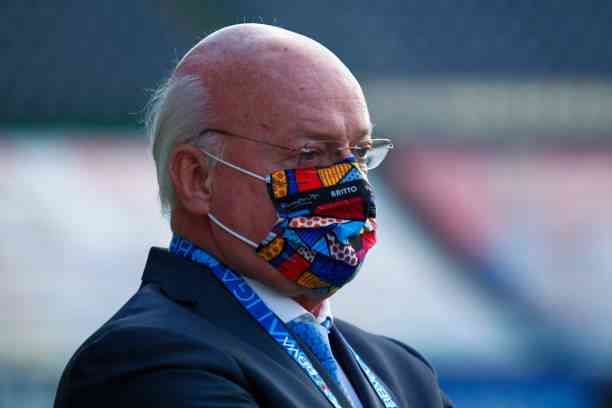 Enrique Bonilla, former president of Liga MX, heads the list of the eight individuals involved in the ‘Pact of Caballeros.’

Enrique Bonilla, former president of Liga MX, will have to pay a double fine to the Federal Economic Competition Commission (COFECE), after confirming the names of the eight natural persons colluded in the ‘Gentlemen’s Pact’ and in the implementation of the capped salary of Liga MX Femenil.

Bonilla is considered the intellectual author of the salary cap, set at a maximum of two thousand pesos a month for the soccer players of all the founding teams of the Liga MX Femenil, which contributes to an act of monopoly.

How much does Enrique Bonilla have to pay COFECE?

The manager, who was responsible for bringing the development of Mexican men’s and women’s soccer to a successful conclusion, “knew and wanted the behavior” and was the one who “proposed the salary caps for the Liga MX Femenil,” for which he will have to pay little more than 2.2 million pesos, indicates ESPN.

Along with him are two other people responsible for the salary cap: Anna Peniche and Víctor Guevara. Peniche served as a lawyer for the MX League until September 2021 and now works within the Court of Arbitration for Sports (TAS) and is indicated by Fidel Kuri, for favoring a medical diagnosis of a player transferred from Santos to Veracruz in 2019. Guevara, in both serves as director of the Center for Technological Innovation.

Who are the others sanctioned?

Bonilla, Peniche and Guevara también make up the other COFECE list, referring to the ‘Pact of Knights’ together with Justino Compeán, Decio de María, Víctor Garza, Guillermo Cantú and Margarita de Jesús Iglesias.

Justino Compeán served as president of the Mexican Soccer Federation from 2006 to 2015. Decio de María was the federation’s general secretary, the right hand of Justino, who became president of Femexfut in 2015 and left office in 2018. He currently works for a pharmaceutical chain owned by a Chiapas family that managed the disappeared Jaguares for some time.

Guillermo Cantú is another of the public figures, and who served as director of National Teams and as sports president of Bravos de Juárez, a position he left in May 2021.

According to ESPN, the sanctions for the ‘Gentleman’s Pact’ monopolistic practice range from 1.6 million pesos, up to 14.5 million for the eight involved.

In addition, as a legal entity, the Mexican Soccer Federation was sanctioned with 2.2 million pesos for the ‘Gentleman’s Pact’ and 15.5 million for imposing the salary cap of the Liga MX Femenil.

This is how the fines were distributed

Sanctions And Quarantine: What’s Next For Players Deported From Argentina In Barazil?