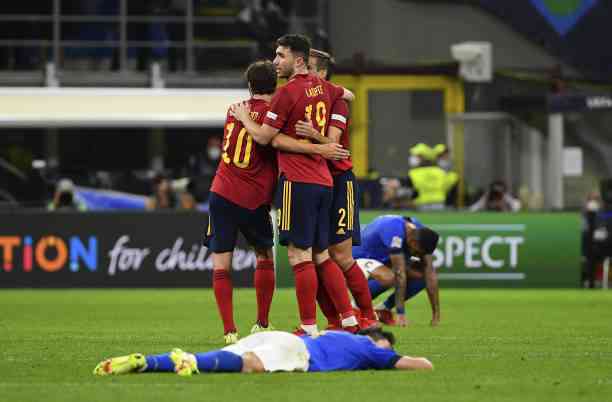 Luis Enrique and the Spanish National Team ended Italy with 37 games undefeated to advance to the Nations League final.

We already know the first Nations League finalist in UEFA. It took Spain 45 minutes to end a streak of 37 matches for Italy without knowing the defeat in an official match. Ferran Torres donned the center forward suit to score the double.

Luis Enrique was on everyone’s lips long before the match began, as one of Barcelona’s youths who has not even 10 games in the first division, would start with the Spanish National Team. Gavi would be part of the 11 players who started the game.

Pablo Martín Páez Gavira is the full name of Gavi, a Barcelona midfielder, who became the youngest player to make his debut for the Spanish National Team, as he is only 17 years, two months, and one day old. So young and already in a semi-final!

Roberto Mancini, coach of Italy, was surprised by the good play of his rival and could not find a way to reverse the attacks from Spain, and it took him much more work after the expulsion of Leandro Bonucci for a double yellow card.

37 games without defeat, a record quite difficult to match and in an Italian moment of resurgence after several World Cup failures. Spain awaits the winner of the confrontation between Belgium and France to dispute the final of the Nations League.

Spain came out to eat the Italian National Team, and at 17 minutes it struck the table. Mikel Oyarzabal was driving the ball down the left-wing, and when the Italian defenders tried to squeeze it, he launched across to his team’s ‘9’.

Ferran Torres disguised himself as another Torres, the ‘Niño’ and as a forward-center, he won the space between the defense of Bonucci and Bastoni, who with his speed took advantage of them and only had to finish with the inside of his right foot to place the ball away from Donnarumma.

Before the end of the first half, Spain controlled the match at all times, and with an extra man, possession of the ball was easier for them. Marcos Alonso joined the attack with a controlled ball and gave a pass to Pablo Sarabia in the long area that went down for Mikel Oyarzabal.

The Real Sociedad player raised his head to see that Ferran Torres had won the back of the Italian defense and put a Vaseline to take advantage of the spaces. The Manchester City player was alone and hit a cross header for 2-0.

Chiesa, always Chiesa. Although he did not start as a starter, he knew that, with the score against, it would be the first change in search of reversing the situation for Italy. He tried several times, but it was in an inattention of Spain, which won the mark, and from the midfield, the ball was driven only against the goalkeeper.

Lorenzo Pellegrini accompanied the play at all times, while Pau Torres and Aymeric Laporte had already lagged far behind in the play. Unai Simón tried to shrink Chiesa, who only had to give the ball to the right for Pellegrini to push the ball.

Costa Rica Is Beaten! The Pre-Olympics Tri Is One Triumph Of The Olympic Games