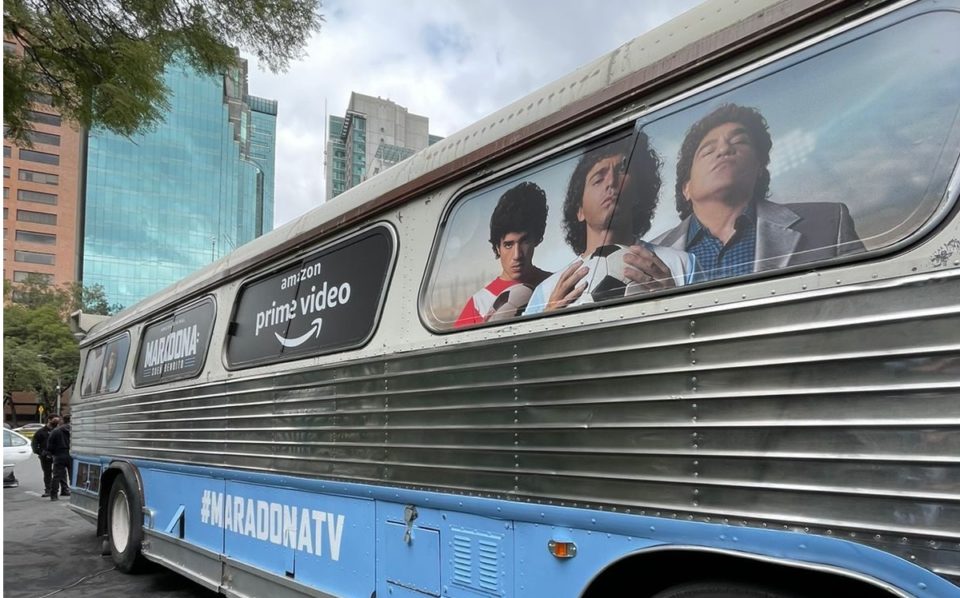 Almost like an interactive museum, Amazon Prime Video recreated the bus that took Maradona and Argentina to the 1986 Mexico Final.

The legend of Diego Armando Maradona is only growing and one of his most important moments was the 1986 World Cup in Mexico. The relationship of the former Argentine footballer with the Aztec territory is of the utmost importance, and that is why there are usually many tributes to remember the feats he achieved in these directions.

That World Cup marked a watershed not only in the career of the ’10’, but also in the history of international football. Amazon Prime Video remembers all this in the series ‘Maradona: Sueño Bendito’ and took the experience a little further by recreating the means of transport of the ‘Albiceleste’ in that tournament.

This is a very special bus, as it recalls Maradona’s legacy at the 1986 World Cup in Mexico beyond the field.

Maradona’s race to Mexico 86, with a special guide

The most interesting thing about the tour is that it is not just any bus. In addition to being the replica of the one that brought Maradona and company to the World Cup Final in Mexico 86, it has a unique guide: Alexa.

Amazon created an unforgettable experience in the hands of its famous smart speaker, who told us details about the birth of ‘El Diego’ and his family with just one indication.

“Diego Armando Maradona was born on October 30, 1960, in the Evita hospital, in Lanús, in the province of Buenos Aires, Argentina. He was the fifth of eight children and the first son of the marriage between Diego Maradona and Dalma Salvadora, “explains Alexa.

That is only a taste of everything he knows since we were able to ask him about the passage of the ’10’ by Boca Juniors; He also told us about his time at Napoli in Italy, his memorable goals and the famous story about ‘The Hand of God’ could not be missed.

The historic Amazon truck also served as a small exhibition on the trajectory of Diego Maradona before and during Mexico 86. Everything surrounded us on the tour from the jerseys he wore, the flags that accredit him as a scorer in the Argentine Metropolitan Championship, and his achievements with the Under 20 category of the national team.

One of the most important parts of this story and of the experience awaits us almost at the end of the hall. The studs with which the ’10’ played the game against Germany were located under one of the photographs that went around the world at that time: Maradona kissing the World Cup.

Interaction with Maradona’s goals and trophies

Amazon took a step further when trying to create an experience with Maradona, and this allowed us to feel at the World Cup in Mexico 86. The figure of Alberto Lati appeared at the end of the small exhibition on the Argentine star to give rise to the recreation of his goals .

There we could all feel a few cracks when finishing with the head and celebrating with the ’10’ in the jersey of the ‘Albiceleste’. Immediately afterwards, it was time to take the photo as if we were Diego himself at the World Cup celebrations with a trophy in hand.

FIFA Opposes The Idea of A European Super League: What Benefits And Disadvantages Would This Tournament Bring?