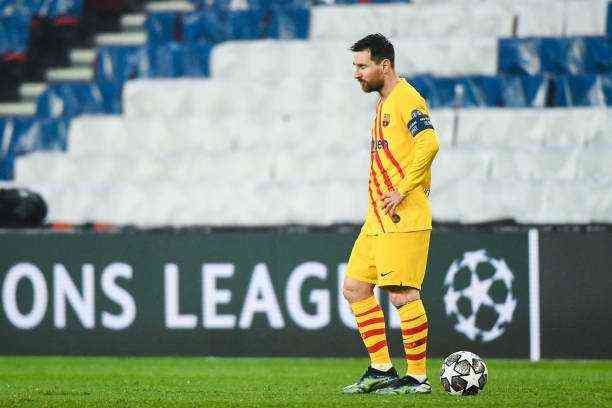 Eliminated from the Champions League, Messi’s uncertainty and how little Barcelona has left in this 2020-2021 season.

With the Champions League’s failure already consummated for Barcelona, we can make an evaluation of the season, in which we can find brilliant moments and moments in which it would be worth turning the page.

The remainder of the season will be key for the future of Barcelona and without a doubt for Messi, who already warned once that he wants to leave and now they will have to propose a project that is worthwhile, in addition to winning the trophies that he has left with the team culé.

After terrible management by Bartomeu and a project that led Barcelona to burn with their own demons, Laporta was elected president of Barcelona. Away from the quarry, with difficult debts to pay off and a football gap that culminated in 8-2 against Bayern Munich.

The arrival of the current president augurs better management, and let’s be honest, it is very difficult to do worse than Bartomeu; But the fresh ideas, promises (even without so many foundations in terms of signings), and a previous success at the head of Barcelona, put him with positive thoughts from the fans.

There are 12 games left to finish the 2020-2021 La Liga season, and Barcelona is in the second position of the table, 6 points behind Atlético de Madrid. Now without Champions, he could focus all his effort on cutting the advantage of the ‘colchoneros.’

It will not be easy because he still has matches against Real Sociedad, Real Madrid, Villarreal, Valencia, and Atlético de Madrid itself, and only one of these at home. 15 points against championship contenders, and some of them risk their lives to reach the European positions.

Complicated situation for Messi and the Catalans, which on the positive side we can find that the Argentine star will get one more top scorer on his own . Currently, he is with 19 goals, and his pursuer is someone more than known in Luis Suárez.

They reached the final after a brutal comeback, here they could, with Piqué as a shield raising the flag of Catalonia to take the game to overtime and that Braithwaite (not kidding) will end the aspirations of Sevilla.

Despite the fact that it would be disputed in the calendar year of the 2021-2022 season, the tournament would still belong to the current campaign y se ganaría el derecho a disputarla si gana alguno de las 2 competiciones que aun disputa, cosa que no es tan complicada.

Only a historical debacle would make Barcelona stay one more season without winning any official tournament that it disputes.

Without a doubt, the most important thing for Barcelona and its aspirations is not only in the medium term but also in the long term. Winning the remaining championships, displaying good football and, as we mentioned before, a project that Messi considers the winner, will be the foundation to make him stay.

Against has the low or no budget for signings and would have to get rid of players of weight in terms of its name, but who have not performed in the squad such as Coutinho, Griezmann, Pjanic, Umtiti, and some others who could sneak into this list.

In favor, he has the love for Barcelona, the bright future he has with the youth squad, and youth players such as Ansu Fati, Pedri, Ilaix, Mingueza, Riqui Puig.