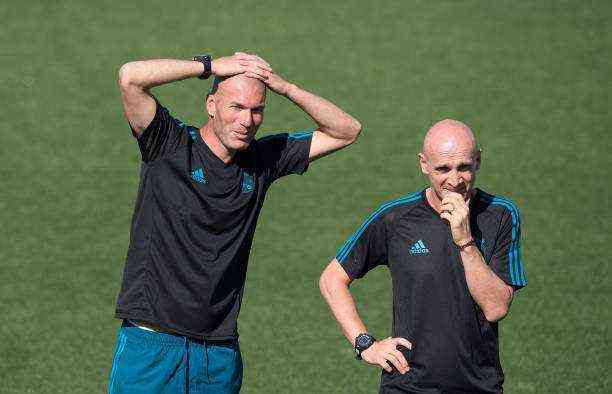 David Bettoni has become an unexpected protagonist in the preview of Alavés and Real Madrid’s preview in Mendizorroza. The second coach will be in charge of replacing Zidane, who has been infected with coronavirus and is isolated at home. The Frenchman is much more than an excellent helper for the Frenchman, he is also his great friend and inseparable companion.

Zidane is a reserved man, but those who know him best assure him that it is forever when he gives you his friendship. Something like this must have happened with Bettoni, with whom he coincided in the lower categories of Cannes. They were both in the same residence, and it was David who asked Zizou for help to heal the blisters caused by the boots. The second coach liked the Madrid coach’s flat more, as it had a bidet. At that time, a relationship emerged that continues to this day.

Zidane did not have a good time at the beginning of his career. He had separated from his family, had to overcome difficult moments, and some night crying. But the appearance of Bettoni helped him to overcome all those bad moments of puberty. The two became inseparable in the fight to fulfill their respective dreams of becoming professional players. What joined that bidet no one has been able to separate.

Zidane began to take off his career. At the age of 20, he was signed by Girondins, and he never stopped growing, while Bettoni, a year older than him, was not able to knock down the door from his central defense and pivot position. For this reason, when Juventus signed Zizou, he decided to take his soulmate with him. David speaks Italian, so it would help him to adjust. At the same time, the current assistant could live a new experience in the transalpine country in his eagerness to travel and learn about other customs in football. Of course, he did not stop playing ball. Avezzano, Alessandria, Lucchese, or Brescello were the destinies of the French, who was already beginning to assimilate that he would not reach the most absolute elite

With the passage of time, the friendship lasted, and both returned to work together, although this time on the benches. In fact, some assure that it was Bettoni who convinced Zidane to be a coach. For this reason, after a first-year as Ancelotti’s second in the Real Madrid first team, Zizou decided to take the step, and both arrived together at Castilla, where they would begin a successful technical career.

Bettoni’s role is key. Zidane is the charisma, the visible face, but David is the one who works in the shadows. The one who prepares the team technically. In fact, he is in charge of organizing the technical talks that Zidane later gives to his players.