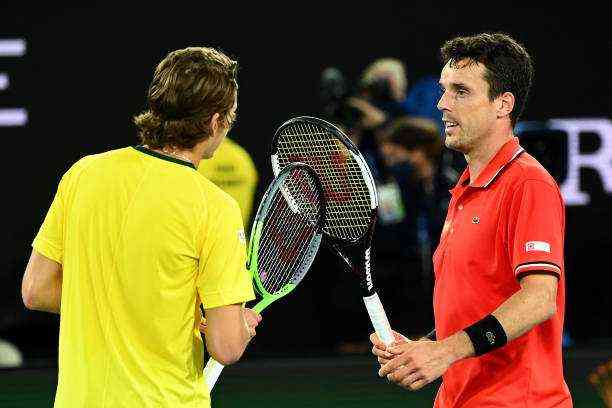 The absence of Rafael Nadal does not leave Spain an orphan of a number one. Roberto Bautista took responsibility due to the discomfort in his compatriot’s back, and came out the winner (4-6, 6-4, 6-4) of a frenetic duel against Alex de Miñaur, leader of the host, Australia, to seal the first triumph of the Spanish team in the ATP Cup. After a very negative start, Rober got up, and in what way, to turn the scoreboard and end with a category victory against one of the most seasoned players on the circuit.

After the victory of Carreño in the opening match, substitute Rafa Nadal as number one jumped the track. Roberto Bautista, formerly Spanish number two, had to take over the reins of the team in the star match of the day, against Alex de Miñaur, who year after year is growing, and in this 2021 he promises many joys for the Australian fans.

De Miñaur was going to start mercilessly against the team he was able to defend – he ended up deciding on Australia as a teenager. With a dizzying tennis, full of mobility and offense, but also patience, the Australian erased Bautista from the court, soon taking the first break of the match, on which he was going to build an advantage that increased both in scoring and in moral, before a dislocated Roberto.

The man from Castellón could not find his weapon of mass destruction, a right that has accompanied him in every victory and that, without it at the highest level, makes it difficult for him to overcome his rival. Before De Miñaur, one of the emerging talents, Rober’s seniority was going to start going unnoticed, but he would appear at a key moment, with 1-5 against, to add a break that was going to weigh much more than expected in the match.

Bautista was able to continue rowing until the 5-4 against, but once there, De Miñaur would add the necessary points to score the first set. The partial victory was the result of the initial arreón, but the reality showed that Roberto had landed in the match and, despite having a disadvantage, his chances of victory remained intact.

With the right, the comeback begins

After a series of breaks in the first set, the second brought calm, always with Bautista a point above. The Castellón player had a breaking ball in the opening game of the second round, twice, and although he could not take advantage of his opportunities, he did install fear in De Miñaur’s body, who lost his serve in the second round, giving an advantage to Rober who was going to be key in the future of the set.

Much more aggressive, dominating the exchanges until he unhinged his rival, Roberto would add game to game until he placed himself with the possibility of closing the set. He did not succeed, miraculously, after some great points that De Miñaur saved in extremis. Bautista was not going to fail, and the contest was equaled with the third set as a decisive element of the match and the play off?

Roberto had reached cruising speed, and the turbo was not going to stop until victory. A new break showed the superiority of the Spanish, much more settled in the party than De Miñaur. Dislocated and affected by the pressure, the Australian’s undoubted talent only appeared by dropper. The advantage, also on the scoreboard, was already running hand in hand with the Castellón.

The mission required being solid on serve, and Bautista fulfilled the predictions and placed a wall that prevented De Miñaur from having any real options to equalize the contest. Thus, the games passed at speed higher than that desired by Alex, who fought and scored great points, but could not prevent that, two hours and 22 minutes after the first point, Bautista raised his arms, confirming his triumph and the victory for Spain in their first tie of the ATP Cup.