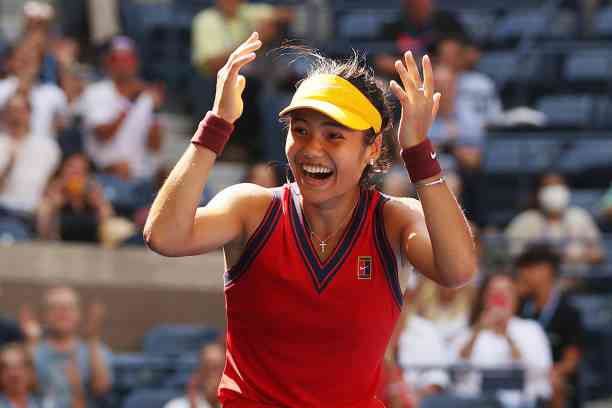 Although Emma Raducanu is under thousands of spotlights during the US Open, her beginnings in the sport were in ballet and fast go-karts.

Emma Raducanu made history at the 2021 US Open by settling into the Final against Leylah Fernández. After 53 years, there will be a British tennis player in the final game of the last Grand Slam of the year, as Virginia Wade did it in 1968, and since then, there has been a long drought.

Likewise, she is the first representative of Great Britain (male or female) to reach the Final of the tournament after starting from qualifying. As if that were not enough, she has not lost a single set since she began her journey in New York.

Considered a prospect or future projection, it has shown that today it is already a reality. There will always be details to improve or adjust, but this is a great new story.

Who is Emma Raducanu and how did she grow up so fast in tennis?

Emma Raducanu talks about the union of different countries, as well as their traits and cultures: Canada, England, Romania, and China make up the same in the 18-year-old tennis player. Here’s the explanation …

The current finalist of the US Open was born in Toronto, Canada. Her father Ian is Romanian, and her mother Renee is Chinese. When Emma was two years old, the whole family moved to Bromley, England, and most of her life was spent in that city.

There she also approached sports; Besides training tennis, he tried ballet, golf, skiing and go-karting. However, the racket became her strength and passion from the hand of the English federation. As a junior, she won her first tournament at age 13, and soon after, she grew stronger to seek the elite.

There appears another great figure in this discipline: Nigel Sears. Her current coach also trained figures such as Amanda Coetzer, Daniela Hantuchova, Ana Ivanovic and Anett Kontaveit. Of course, she became a figure to watch along the way until Emma Raducanu debuted in a WTA main draw.

This presentation was given at the Nottingham Open in June 2021 as a wildcard. Months later came the debut in a Grand Slam: Wimbledon. Being at home represents a great motivation for any athlete, and Raducanu took advantage of it to get to the round of 16.

Her impact on the world of white sports grew in recent months, but exploded during the US Open. The excitement to see this new star is growing and is broadcast throughout the UK. Whatever happens, Emma’s participation is already historic.