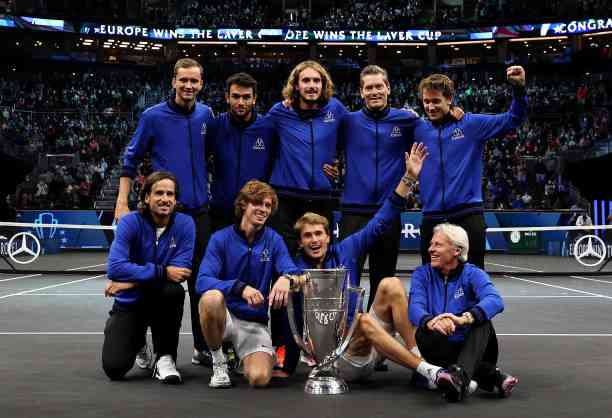 Imposing: Zverev and Rublev achieved the fourth consecutive title of Team Europe in the Laver Cup, 13-1 over the Rest of the World.

4 consecutive trophies! The European Team confirmed its broad and forceful dominance in the Laver Cup, as it defeated the Rest of the World 13-1 and won the four-time championship of this entertaining competition, organized by Roger Federer.

What was done by the pupils of Björn Borg could even seem simple, compared to other editions. On Day 1, the Rest of the World Team could only score one point, on Saturday the Blues and the outcome won all 4 matches was quite predictable.

However, that does not mean that we saw bad games. Especially Rublev and Zverev vs Opelka and Shapovalov, who sentenced the Laver Cup for Europeans, left us with incredible plays. The Rest of the tournament didn’t disappoint either, so we had a great edition… like every year.

The point that the Laver Cup gave to Team Europe

The start of Sunday activity and the last day represented the definitive victory for Team Europe in the Laver Cup. The Team World representatives did their best to agree distances, but the balance tipped towards the four-time champions with one set per side.

With Zverev at the service, it only took one return, and finally Andrey Rublev consummated the title. Daniil Medvedev, Stefanos Tsitsipas, Matteo Berrettini, Casper Ruud and Feliciano López immediately celebrated alongside Captain Borg.

Trophy in hand and Olympic lap in Boston

Despite some speculation about the order of activities on Day 3 at the Laver Cup, Team Europa received their cup before the last exhibition of the weekend. The blue team toured the TD Garden to thank the fans for their support and kick off the celebrations.

The funny thing is that the Spanish Feliciano Lopez stayed in the background of the celebration. He came to Boston as an alternative player for the European team and had no participation on the court, but Tsitsipas involved him at all times until he was convinced to take pictures with the trophy.

On the other side, there was not the same joy and effusiveness; Furthermore, the fourth consecutive defeat for the Rest of the World raises doubts about the continuity of John McEnroe as captain. While those aspects are defined for the Laver Cup 2022 – to be played in London – the Americans sent a message to rivals in Europe and those who inspire the tournament.

“Congratulations Team Europe, they are an incredible group of players. To my team, I am proud of you, and I appreciate your efforts. It was amazing that Roger Federer came. Thanks also to my idol, Rod Laver. Björn Borg, I love you very much, but right now I hate you,” said the historic former tennis player.