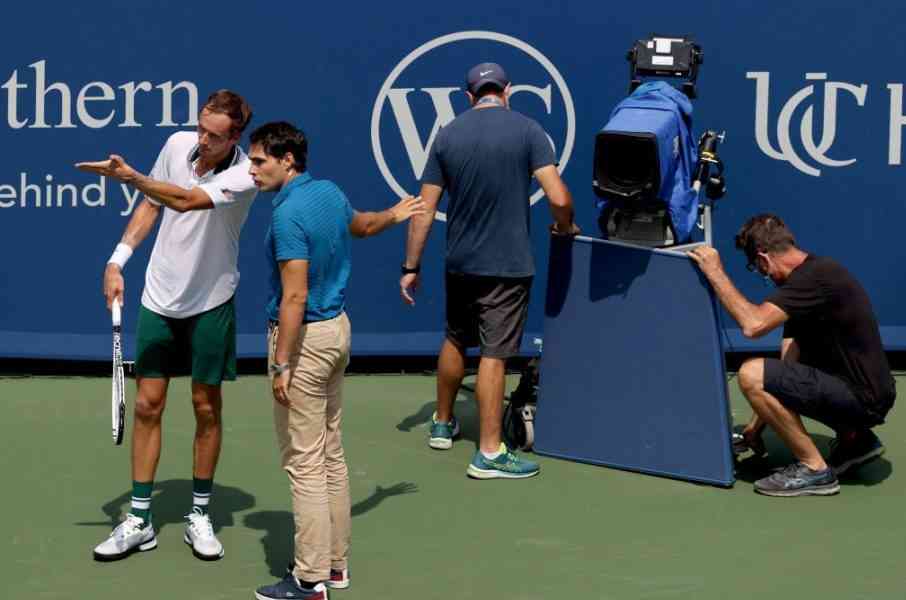 Chale: Daniil Medvedev suffered an accident at the Cincinnati Masters, and as a consequence, he kicked the camera with which he crashed.

A consequence of his… temper? Russian tennis player Daniil Medvedev gave something to talk about during the semifinals of the Cincinnati Masters for more than his mistakes or his defeat. In frustration, he collided with one of the broadcast cameras and “retaliated” by kicking it.

The incident occurred during the match against his compatriot Andrey Rublev. Although Medvedev had a set going for him, during the second episode, they tied at one game and 15-15, when in an attempt to save the ball, the player crashed with the recording object.

Then, Daniil Medvedev shook hands with the cameraman and made sure she was okay, but the picture changed while the camera was returned to its place. The chair umpire came down from his seat to speak with the world number 2 in the ATP rankings.

“Take it away. I almost broke my hand, “argued the player. As the two debated, the Russian returned to the camera and kicked it. At the same time, the tournament staff tried to rearrange the device to continue with the transmission of the game.

It should be noted that it is less and less common for cameras to be located in this area. It does not happen in all competitions because sometimes they appear in the stands or other strategic points; however, in Cincinnati, all players find something, not just one.

The reactions? in social networks

Topics like this usually generate a lot of controversies and unleash a wide conversation on social networks. However, it seems that the case of Daniil Medvedev and the camera was left behind with the 2-6, 6-3, 6-3 loss that he ended up suffering against Rublev.

Some users raised their voices as a result of this situation, as they considered that there are few reactions, and if it were some other character, the images would have already gone around the world.