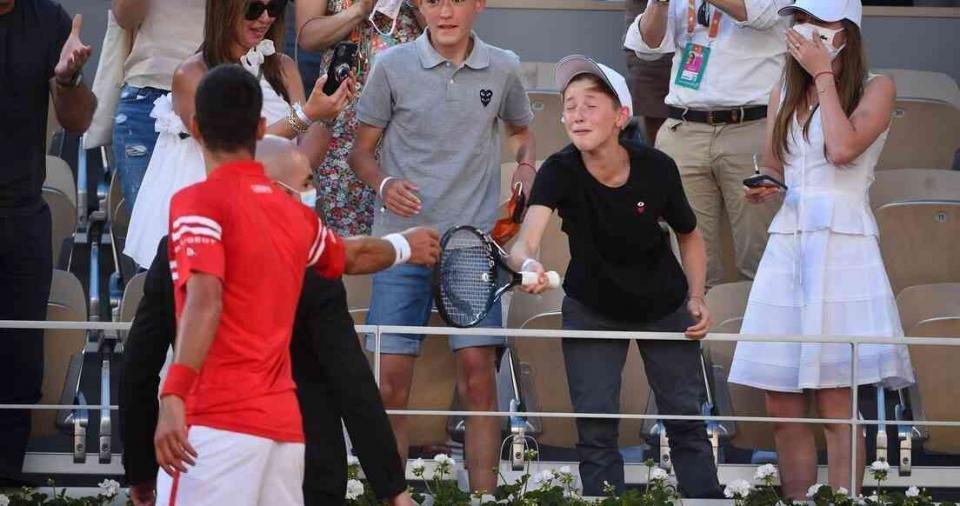 The gesture of the week: Novak Djokovic handed his racket to a Mexican boy named Mateo, who advised him at the Roland Garros Final.

The best of the tournament! Once Novak Djokovic was crowned 2021 Roland Garros champion, he turned to the stands and handed his racket to a young boy, who showed his excitement in every possible way.

The video immediately went viral, including Arizona Cardinals player JJ Watt. However, we did not know that the little boy is called Mateo, he is Mexican, he is 11 years old, and he is not actually an acquaintance of the Serbian tennis player.

This was announced by Mario González, a CNN correspondent. For his part, Novak Djokovic explained that the gesture with the racket has reason to be in the support and advice that Mateo gave him throughout the Roland Garros Final, as he had to come back two sets to win.

“I don’t know the boy. It was basically in my ear the entire match, especially when I was two sets down. It was cheering me up. Actually, he was also giving me advice.

“He would say, ‘Hold your serve, get an easy first ball, then he told me to look for his (Tsitsipas) backhand.’ He was literally advising me. I found him very cute, very kind. So I wanted to give the racket to the best person, which was him after the game. It was a kind of gratitude because he stayed with me and supported me, “explained the number one in the world at a press conference.

“I didn’t know he was listening to me”: Mateo

“I have admired Djokovic a lot since I have known him, more for his personality and for his game. I was given the opportunity to motivate him, and it is an honor. I was giving him some tips because I wanted him to win. I didn’t know he was listening to me, he made no expression. In my life, I will sell the racket, “he said.

Novak Djokovic’s gestures, beyond the racket

Despite being viewed by many tennis fans as an unfriendly and arrogant player, Novak Djokovic has done much more than just hand over a racket. Right at Roland Garros, but in the 2014 edition, the Serbian stole the spotlight and earned applause for another great gesture.

As the rain broke in France, the player called the boy who was holding his umbrella and invited him to sit next to him. Then, he exchanged his racket for the umbrella, pretending that he was the one in charge of taking care of it.

As if that were not enough, he invited him for a drink, they toasted and enjoyed one of the most emotional moments in the history of the tournament.