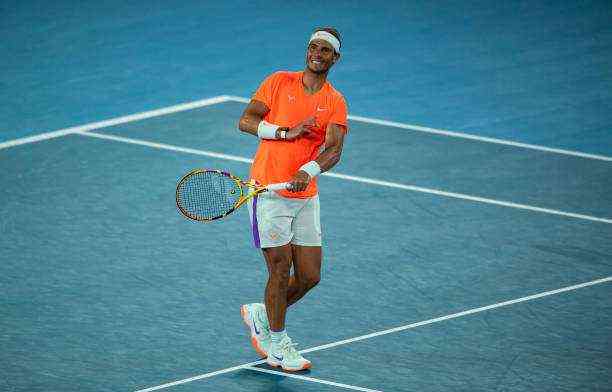 Rafa Nadal has presented his new racket: the Pure Aero Rafa model from Babolat, a brand he has been associated with for the last 20 years. After giving up the dispute of the Masters 1000 in Miami, the Spanish tennis player will reappear on the clay tour next April.

“Hello everyone…. Finally, the day has come! Proud to officially launch my new Pure Aero Rafa line in collaboration with Babolat! What do you think?, Rafa Nadal wrote on his social networks to present his new racket to his thousands of followers.

It is the Pure Aero Rafa model from Babolat, a racket in purple, orange, and yellow tones. It has “an aerodynamic frame, which integrates the bumper and eyelets, increases the speed of the racket head, facilitating spin shots,” according to the Babolat product description. In addition, the Woofer system allows you to “deliver incredible hits, offering unique contact and extremely precise control.”

The racket is already on the market for all those who want to have in their hands a tool like the one used by Rafa Nadal on the court. The new model of Nadal’s racket is priced from 259.95 euros – unstrung. It is also available in the same bag that the 13-time Roland Garros champion brings to the track, priced at € 129.95.

“We couldn’t have dreamed of a better way to celebrate the Great Man that he is, on and off the pitch, and our 20 years of association, than to launch a range that bears his name. The Pure Aero RAFA is the consecration of the bond that has united us with Rafael Nadal for years”, they comment from Babolat.

Will reappear on the clay tour

Rafa Nadal will reappear on the circuit on the next clay tour. This season the Spanish tennis player has only played the Australian Open, where he reached the quarterfinals. Later, Carlos Moyá’s pupil resigned from participating in Rotterdam, Acapulco, Dubai, and Miami to drag his back and thus focus on one of the great objectives of each season: clay tournaments.

Daniil Medvedev has recently overtaken Rafa Nadal for what occupies the third position of the ATP ranking. This will mean that he could face the number one in the next tournaments, Novak Djokovic, in the semifinals instead of in the final. The changes in the ranking due to the health crisis make it more difficult to calculate the possible variations in the ranking, but it would be important to regain number two before Roland Garros.

“I Cried The First Day”: Victoria Azarenika on Quarantine at The Australian Open