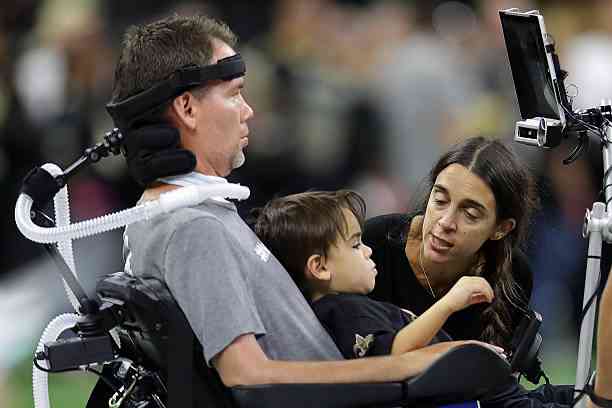 Steve Gleason, former player for the New Orleans Saints, was diagnosed with ALS in 2011, and months later, his son Rivers was born.

Between 2000 and 2005, Steve Gleason made a place in the memory of New Orleans Saints fans. His blocking to thwart a field goal kick gave him identity, and his action became a motivational message in the city after Hurricane Katrina.

He formally retired in 2008 and began to lead a relatively normal life until in January 2011 he was diagnosed with ALS (Amyotrophic Lateral Sclerosis), an autoimmune disease in which neurons die, including those responsible for activating muscles, thus that the patient loses the ability to move, posture and vital functions, such as breathing.

Six weeks after that diagnosis, Steve found out he would be a father. Aware that as the years went by, he would lose more and more important physical abilities, he decided to make a kind of video diary so that his son, Rivers, could remember him.

The doctors’ prognosis was five years to live; therefore, in one of the videos, he sent his son Rivers a message in which he promised to be by his side until he was able to stand up on his own.

“I have been thinking a lot about parents and children since you were born. At this point, it looks like we’re not going to have the normal parent-child relationship. I’m going to be close, friend. It’s not going to be easy, but it’s going to be amazing. I will be close until you are able to stand on your own,” he says in the video.

ALS is a still unknown disease, and therefore survival prognoses are not always correct, and Steve has seen his son grow up, who is now nine years old and aware of what his father has done for him.

For this reason, Rivers became involved as an accomplice of the ESPN network, to surprise Steve with emotional material. The little boy imitated his father and made a special video and a letter on the occasion of Father’s Day.

“Dad, I think you are a great leader, and you teach us to be resilient in difficult times. You are always trying to help. When times are tough, you stay strong,” he mentions in part of the video.

In 2020, Steve Gleason received the Congressional Gold Medal to raise awareness of ALS through his foundation, “Team Gleason,” which has raised millions of dollars for ALS research and treatment.