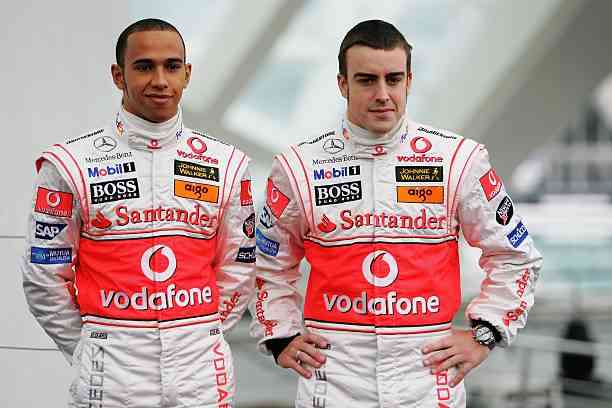 Have you already seen the second season of ‘Fernando’ on Amazon? The Spanish rider had a marked disagreement with Lewis Hamilton in 2007.

Lewis Hamilton has not always been one of the favourite drivers of the Formula 1 fan, beyond being recognized as one of the best drivers in history after winning seven titles, which make him the top winner in the serial, together with Michael Schumacher.

However, the British career has been marked by his controversial rivalries and the first of them was with Fernando Alonso, in 2007. Both the Spanish driver and Hamilton, agreed in the McLaren team, which by then had an extremely competitive car and favourite to conquer the drivers and constructors title.

The war between Hamilton and Fernando Alonso

However, Kimi Raikkonen ended up as champion at Ferrari, thanks to McLaren’s internal war. Fernando Alonso put “the foot” to Hamilton on a couple of occasions, and the Briton did the same when he had the opportunity.

The second season of the series “Fernando,” on Amazon, (third chapter), deals with part of this rivalry that ended in a feud not so much with Hamilton, but with the McLaren team.

“We had a very tough, but fair competition. Honestly, I believe and he also, that the team did not handle the situation, “he explained to Marca at the time.

The pit stops he learned from Alonso

Currently, Hamilton tends to push the regulations to the limit, so on more than one occasion, he has delayed the exit from the pit alley, especially to affect the Red Bulls of Checo Perez and Max Verstappen.

Hamilton himself was the victim of this maneuver when Alonso was slow to come out of the pit stop in a qualifying session to prevent Hamilton from making his fastest lap.

“My relationship with Alonso was toxic, and it also intoxicated the whole team. There are people with whom you get along and others with whom you cannot live in any way. If you put two world champions racing on the same team, they will each try to do their best job. You are not going to yield to him around a curve. You’re going to fight to get out of it first. We have too much friction,” Hamilton mentioned in 2017, according to car and driver.

What else does the Fernando series offer on Amazon?

As a result of this conflict and statements, Fernando Alonso left a bad relationship with McLaren, despite returning to the team for 2015, 2016, and 2017 seasons.