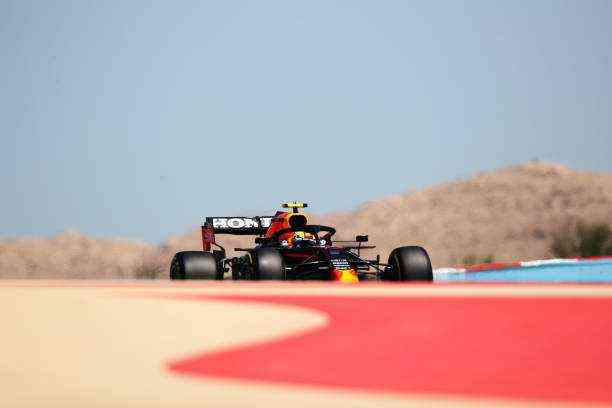 Checo already put the Red Bull RB16B to the test during the second day of the Bahrain test. It was the first time that the Mexican demanded and was demanded by the car during two sessions, in which he gave more than 150 laps of the Sakhir circuit.

However, the tapatío suffered a problem during the second session, since when trying to pass Nicholas Latifi, the engine cover came off, which alerted both the Mexican and the Austrian team, since the power unit was left behind.

The director of the engineering career Red Bull, Guillaume Roquelin, said that the cap’s release does not represent a major problem for the team, but gives information to start the season. “They are the kind of things we want to find in testing,” he explained.

How did Checo Pérez do?

The Mexican was the third fastest driver of the first session with 1: 32.478 as his fastest lap record after 39 laps.

In the second session, in which more riders participated and in which he suffered the problem of the cap, he fell to eighth place after 117 laps, in which his best time was 1.31.682, that is, almost a second faster compared to the first session.

Checo was overtaken by Lance Stroll, his former Aston Martin teammate (ouch, that hurts), but left behind Sebastian Vettel, who replaced him; the German finished last.

Pérez will climb the RB16B again for the first session of the third and last day of testing, and for the second session, Max Verstappen will climb.

“Even though the conditions are very difficult, we work a lot, and there is a lot of development to come. It’s great to work with the team, and I’m getting used to it more and more. I can already feel the potential. Tomorrow (Sunday) I have all morning to continue hanging around”, said the Mexican.

The fastest on the second day of testing

The first session threw Daniel Ricciardo as the fastest driver, with McLaren, followed by Fernando Alonso and Checo Pérez. For the second session, Valtteri Bottas was the fastest on the tarmac, followed by Pierre Gasly and Lance Stroll.

Lewis Hamilton has not looked. However, this does not mean that he is not competitive for the start of the season and could show his potential on the third and final day of practice.

How, When And Where To Follow Checo Perez Live At The Grand Prix?