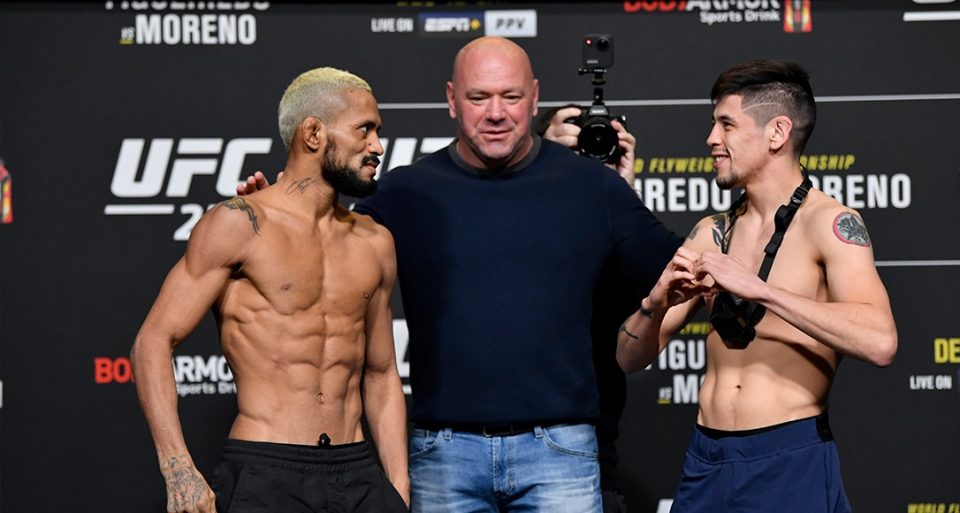 The UFC is already preparing the trilogy between Brandon Moreno and Deiveson Figueiredo. The Mexican will defend his UFC flyweight title in December 2021.

One of the slogans the UFC has gotten tired of saying to its fighters is: ” Don’t leave it up to the judges,” and they are quite right. In his first fight against Deiveson Figueiredo, Brandon Moreno learned that the judges can see a totally different fight.

In a first fight – very close, by the way – Brandon Moreno had to face defeat and get back in the line of contenders for the UFC flyweight title.

On June 12, 2021, Brandon Moreno jumped back into the Octagon for 25 minutes to snatch his Brazilian opponent’s champion title. But with a motto in mind: “Don’t leave it up to the judges,” and he would fulfill his goal at UFC 263.

He dominated the fight completely, and Deiveson Figueiredo did not feel the hard but the thick, because his time as champion was running out. It was in the third round of the fight, Brandon Moreno took the back of his rival and applied a “lion kill” to beat him and be the new UFC fly champion.

Brandon Moreno did not have an easy path to become a UFC champion. He had to overcome several failures, including leaving the company on one occasion due to poor results, but he already tastes the honey of success, and at UFC 269, he will have to defend his fly scepter for the first time.

Brandon Morneo and his trilogy against Deiveson Figueiredo

Brett Okamoto, a journalist for ESPN, reported that the third fight between Brandon Moreno and Deiveson Figueiredo is already official and will be on Saturday, December 11, in addition, it will be part of the UFC 269 event. Who will be the winner in this confrontation?

Although, the trilogy was not the first option for Dana White and the UFC matchmakers, because according to Brett’s information, they wanted to make the fight between Brandon Moreno and Alexandre Pantoja, but unfortunately Pantoja would not be ready for the end of the game.

So Brandon Moreno wanted to stay active in the UFC and not lose a beat, so the best option for him is to face Deiveson Figueiredo for the third time.