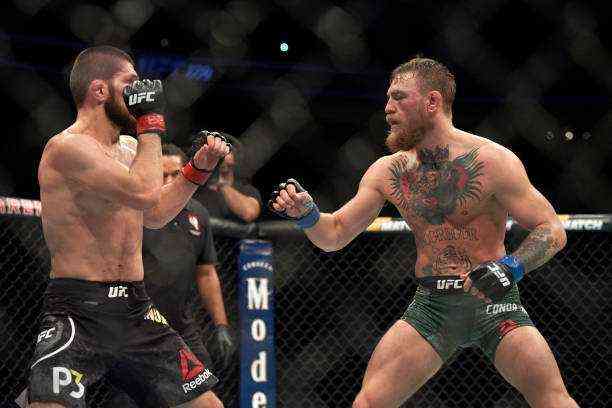 Connor McGregor will fight Dustin Poirier in the main event of UFC 257 on Saturday, January 23, and he is staying at the same hotel as Khabib Nurmagomedov, in Abu Dhabi, so the security of the place is alert for a possible meeting.

Khabib announced his retirement in October, after defending the lightweight title against Justin Gaethje and is in Abu Dhabi to accompany his cousin, Umar, around the corner, so the idea of ​​a second has been nurtured. After a fight, a chapter between McGregor and Nurmagomedov left the spirits alight in 2018, both inside and outside the Octagon.

McGregor and Khabib starred in the stellar fight of UFC 229, and the Irishman was not only defeated, but also subdued and humiliated by the Russian, who surprised locals and strangers by leaving the octagon to face McGregor’s team in the stands, who within the Cage was attacked by members of Khabib’s team.

Both were suspended and fined, and the scenes left things extremely heated, so since then a rematch has raised high expectations.

McGregor has spoken out in favor of a new fight, but the Russian has not, so the Irishman had labeled him a coward, an aspect that changed from 2020, a tough year for Khabib Nurmagomedov, as he lost his father on July 3 due to complications from the coronavirus. In October, he fought to close the curtain on his career.

However, McGregor assured that despite Khabib’s current retirement, the story between the two has not ended, and he remains hopeful of a new fight.

“It is a difficult business. Things have happened in your personal life. I wish you no harm. A lot of time has passed. The world knows that this rivalry is not over. This war is not over. Sport and people need it to happen. I’m not going to chase it if he doesn’t want it. I’ll keep my calm and move on. And that’s it. I will stay calm and move on,” said the Irishman, according to ESPN.

Should the Russian stick with the idea of ​​staying out of business, McGregor secures the lightweight title.

“I would say that if that man continues to dodge this and avoid the commitment to compete again, the title should be vacated. But I’m sure it will happen after this fight. I’m interested in hearing the excuses or what will be said after the fight. But I predict that the title will be stripped, “he declared.

Conor McGregor Wants To Buy Manchester United; Does It Reach You?