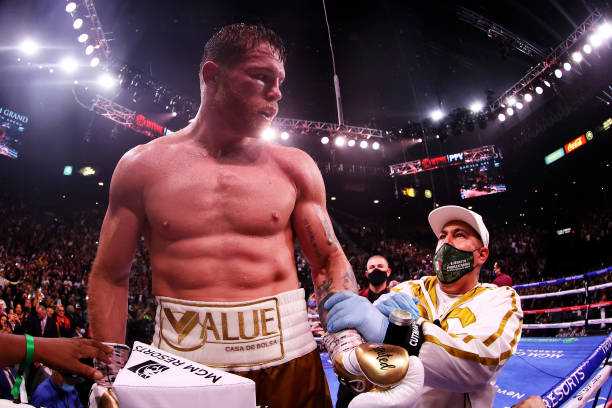 ‘Canelo’ Alvarez does not want to face other rivals that are not boxing, that is why he dismisses the challenges of Kamaru Usman, champion in UFC.

After achieving the goal of being an undisputed champion, ‘Canelo’ Alvarez can afford to take his time to think about the next step in his career, but one thing is certain … he is not interested in crossovers.

Rivals will not be lacking, not only because he is one of the best pound-for-pound boxers in the world, but because the name ‘Canelo’ Alvarez means a lot of money, and anyone would be happy to win a few million, even knowing that the Mexican will give him a beating.

Possible prospects for a fight have come out on all fronts. YouTubers turned pro boxers like Jake Paul, former MMA fighters like Vitor Belfort, and even current UFC champions.

Speaking of UFC champions, last November 6 was not only the fight that would crown ‘Canelo’ Álvarez in the super middleweight division against Caleb Plant, there was also a championship fight in the octagon of Dana White’s company.

Kamaru Usman defended his welterweight championship against Colby Covington, but unlike ‘Canelo’ Alvarez, the UFC Nigerian could not knock out his rival and won via unanimous decision.

‘Canelo’ Álvarez does not have any kind of crossover planned

On the same day, ‘Canelo’ Alvarez made boxing history, and Kamaru Usman made the same in the UFC, but we will break the hearts of those who could dream of a fight between these two representatives of contact sports because it will not happen.

And this fight will not be official, not because Kamaru Usman does not want to, his coach and he have shown and even declared their interest in wanting to fight against the undisputed Mexican champion, but ‘Canelo’ Alvarez has already stopped them in their tracks.

TMZ asked ‘Canelo’ about a possible fight between him and Kamaru Usman. The Mexican’s response was blunt: “It doesn’t make sense to me. I want to make boxing history and I don’t see anything there (referring to a fight with Kamaru Usman“, the words of Saul Alvarez.

What’s next in the future of ‘Canelo’ Alvarez? We still don’t know and the champion has the option of choosing his next destination, but at least his coach, Eddy Reynoso, had already mentioned some names, and here we leave them for you.

They Don’t Call it ‘Money’ For Nothing! Floyd Mayweather Gave His Grandson a Gift of Several Thousand Dollars