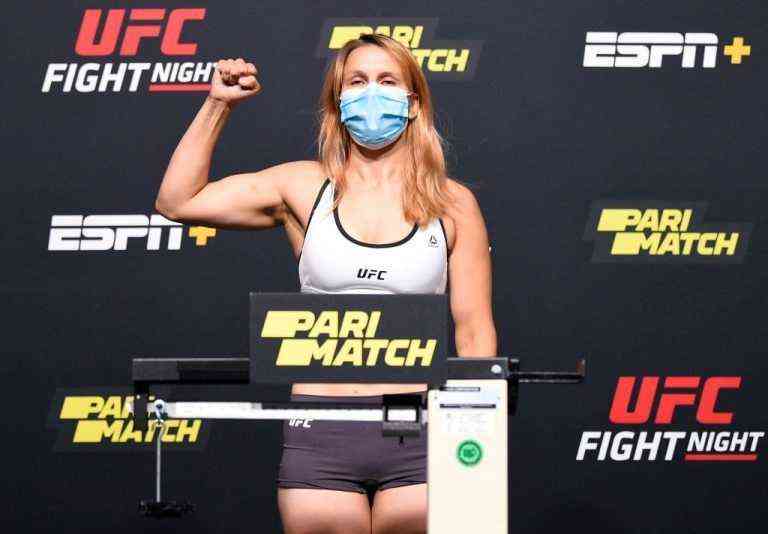 Julija Stoliarenko had everything ready for her fight tomorrow in the UFC, but her weight cut was not adequate, and she passed out.

Being a martial arts fighter is not an easy thing, it takes years of practice, constant training, and quality inside the cage to be able to reach the best levels. But in MMA, there are two rivals to beat, the first is the scale, and the second your opponent, Julija Stoliarenko lost the first fight and in an ugly way.

Julija Stoliarenko was born in Lithuania and began her path into MMA in 2012, and although she had a difficult career start, she was composing her way up to the Invicta bantamweight championship. She came to the UFC on August 8, 2020 with a loss.

Her second fight was scheduled for next March 20 at UFC Vegas 22 against Julia Avila, but the fight could not be because Julija lost the first agreed fight, and it was against the weight cut. For the female bantamweight class, the limit is 126 to 135 pounds.

Stoliarenko got on the scale, and when the officers were checking if she had given the weight, Julija began to lose her balance until she collapsed. She tried to get up, but it was impossible, and when the UFC staff arrived, they could not lift her either.

Julija achieved 135.5 pounds, but the wear and tear on the weight cut was such that her body couldn’t take it anymore, and she momentarily lost consciousness. For Stoliarenko’s health, the fight was called off, and she was taken to the hospital on a stretcher.

Risk of cutting weight in MMA

What is the weight cut? It is a practice in which amounts of water contained in the body are reduced, this is done by most of the fighters in the UFC and mixed martial arts. After losing a quantity of water, the fighters regain the weight in its entirety in the following hours.

That is why we see in some fighters a different face during the weigh-in and another in the fight, the risk is too much as we saw it in Lujila. In some extreme cases, fighters have been seen to lose incredible amounts of weight, like Dean Garnett or Daniel Cormier.

” When the body loses 1% of its body weight in water, thermoregulation decreases, with 3%, which is around two kilos, an average person sees dryness in the mouth and increases the heart rate, with a 4% is already difficult to practice physical activity and losing 10% of body weight can lead to kidney failure or collapse “, commented Marianela Obando, sports nutritionist.

The risks that are run when losing weight in this way and according to the sports nutritionist are: Decreased physical and cognitive performance, fatigue, tiredness and dizziness, lack of concentration, dry mouth, lips and tongue, increased frequency heart and body temperature, character changes with a tendency to bad mood and apathy, pain in the region of the liver and kidneys or heat stroke.