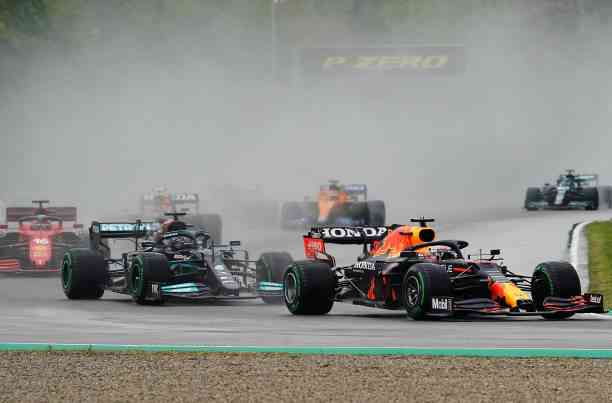 Red Bull made the most of Mercedes’ mistakes and misfortunes. Max Verstappen won the Emilia-Romagna Grand Prix under a race marked by rain and wet track conditions that led to an even more complex race at the highly technical Imola circuit.

Verstappen was joined on the podium by Lewis Hamilton after making a spectacular comeback, while third place went to Lando Norris, who is the revelation at the start of the season. Checo, who started second, finished eighth after a series of errors and a penalty.

Max Verstappen started from the third box, and before reaching the first corner, he already owned the first position after overtaking Lewis Hamilton and Checo Perez, and from that moment, Red Bull imposed conditions on the track.

Checo suffered hazing from the start. The Mexican is not used to starting in the front row and not only suffered the passing of Verstappen, but that of Lando Norris, so he fell from second place to fourth.

The defending champion lost his chances of winning on lap 31, just a few laps from having made his first pit stop. The Briton tried to overtake one of the lapped cars when he lost control of his car and went off the track and into the retaining wall.

Despite the impact, Hamilton was able to return to the track, straight into the pits, to change the front wing, but fell to the ninth position, with practically no podium options. But with the British, there is never anything written.

On the same lap, Mercedes ‘options fell apart as George Russell was about to pass Valtteri Bottas on the right, and Williams’ wheel inexplicably veered left before entering the next corner and hit the side of the driver’s car squarely.

The two cars ended up off the track and with the cars totally wrecked, so the race was over for both of them. For the next year, Russell rings to get to Mercedes, precisely in place of Bottas, who ended up extremely furious.

The accident left many pieces scattered around the track, so the red flag went up, and it was necessary to start again, although finally, the race was reactivated with a moving start.

After nearly 20 minutes of stoppage, the race was launched in motion with a yellow flag, and Lando Norris climbed to second place. However, he couldn’t keep up with Hamilton’s pace and fell to third place.

Checo kept fourth place, and when Leclerc’s third place began to threaten, he went off the track. Moments earlier, rookie Yuki Tsunoda had also missed the car in a very similar way.

Formula 1 Defends Its Decisions At The Belgian Gp: “The Weather Overcame Us”