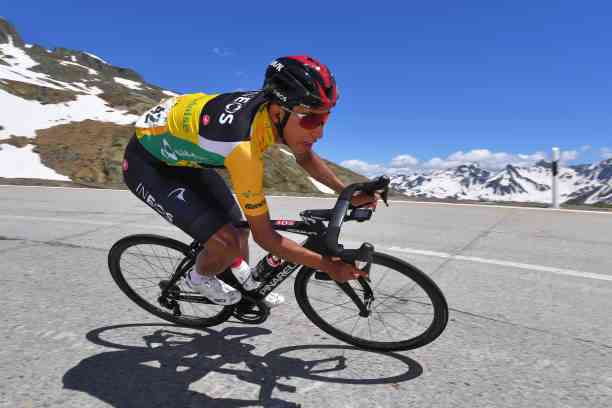 The Giro d’Italia, La Vuelta a España, or the Tour de France are known as the most important road cycling competitions. They usually have one factor in common: the participation of Latino athletes like Egan Bernal, one of the main contenders to win them.

He is the first Latin American cyclist to win the Tour de France and, at the same time, the youngest champion in 110 years. At 22 years old, the Colombian made history in the face of incredible landscapes and complicated roads, all at the hands of the INEOS team.

Now he is looking to conquer his first Giro d’Italia and won the ninth stage of the competition at Campo Felice. Despite the fact that more than half of the event is missing, Egan Bernal is the general classification leader and is emerging as one of the favorites.

Who is Egan Bernal?

He was born on January 13, 1997, in Bogotá, Colombia; however, he grew up in the municipality of Zipaquirá, located in Cundinamarca. Dr. Jose Bulla, who attended his mother during pregnancy, was who chose his name for the respect he has family and means champion.

Bernal’s first race came just when he was 9 years old, when he saw a group of children with helmets and bicycles at the Zipaquirá Sports and Recreation Institute. A friend of his parents lent them money to pay for the registration, which in the end seemed more like an investment: Egan won, and in addition to a trophy, he received a scholarship to train.

Some time later, he was trained under the orders of the ex-road cyclist Fabio Rodríguez and in 2011 he ventured into mountain biking with some amateur teams, other professionals, but yes, with many triumphs in junior categories.

After 2 years, he was crowned in the Pan American Championship in the cadet category. He was followed by the youth national of Cuenca, Ecuador, and the Latin American cadet that took place in Catamarca, Argentina.

With no experience in this modality and only 19 years old, he signed with the Italian team Androni Giocattoli-Siderme. Owner Gianni Savio was fascinated by the young Colombian’s talent after putting him to the test in the Sognando Il Giro delle Fiandre, a professional competition.

In February 2016, he made his debut in the Mediterranean Tour and gained experience in competitions such as the Giro del Trentino, the Tour de Bihor and the Tour del Porvenir. In fact, there was the possibility of participating in the Giro d’Italia, but the required invitation did not materialize.

However, that dream was fulfilled in 2018 with Team Sky, who had been interested in Egan Bernal months before. In different tours, he beat cyclists who appeared as favorites: Primoz Roglic, Richie Porte, and his compatriots Nairo Quintana or Rigoberto Urán.

The following year, Sky stopped sponsoring the team, so its name changed to INEOS. With that modification, the most important achievement in Bernal’s career took place: winning the Tour de France.

It was only his second participation in the French Tour, but he easily beat all his rivals. From then on, the Colombian’s goals are quite clear, and he continues to seek to be crowned in the most important laps in the world.