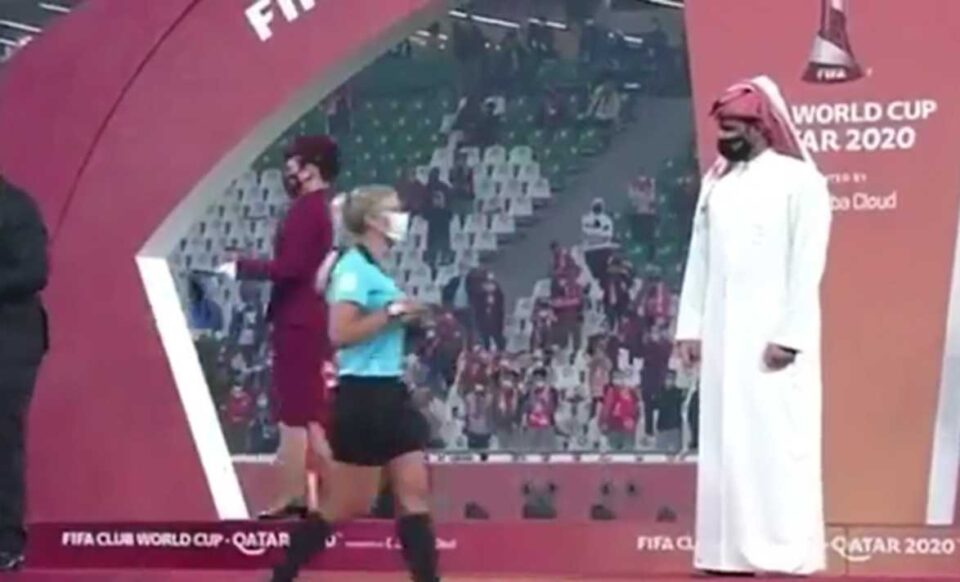 Qatar will be on the lips of football for the coming months, as it will host the 2022 World Cup, despite the corruption scandals that precede it after his election during Joseph Blatter’s era as FIFA president.

The Asian country already had a small rehearsal with the Club World Cup, in which Tigres was runner-up, after losing the final against Bayern Munich, which won the sextete, however, the image during the awards to the referees have given it around the world, after the referees were ignored by one of the sheikhs, who did salute the hissing men.

After finishing the match between the Mexican and German teams, the refereeing body went on to receive their respective medals. Among the arbitration body were the Brazilian Neuza Back and Edina Alves Batista, who were recognized by the president of FIFA, Gianni Infantino.

Steps later were the sheikh, who greeted the entire men’s refereeing body, but not the women’s. The image has caused outrage in social networks, just when women are winning, in a fair and necessary way, an increasingly important place in sport.

Who is the sheikh?

This is Joaan bin Hamad Al Thani, the main political figure in Qatar’s sport, as he has been president of the Olympic Committee of his country since 2015.

He is the younger brother of Tamim bin Hamad Al Thani, Emir of Qatar. This is how the prince is known, who is also the political boss, both in Qatar and in other Arab countries.

He is the youngest of a total of five siblings and is 34 years old, and in his position as president of the Olympic committee, he has the achievement of bringing the Asian Games to the city of Doha by the year 2030.

Why didn’t you greet the referees?

Like other Arab countries, Qatar practices Islam as a religion and has certain codes of behavior between men and women, including dress, education, and social behavior.

One of those codes prevents a man from having physical contact (however minimal) with a woman who is not from his family. This explains the reason why the sheik only fists high with the male referees.

This is just one of the social behaviors that could generate critical controversy before and during the 2022 World Cup.