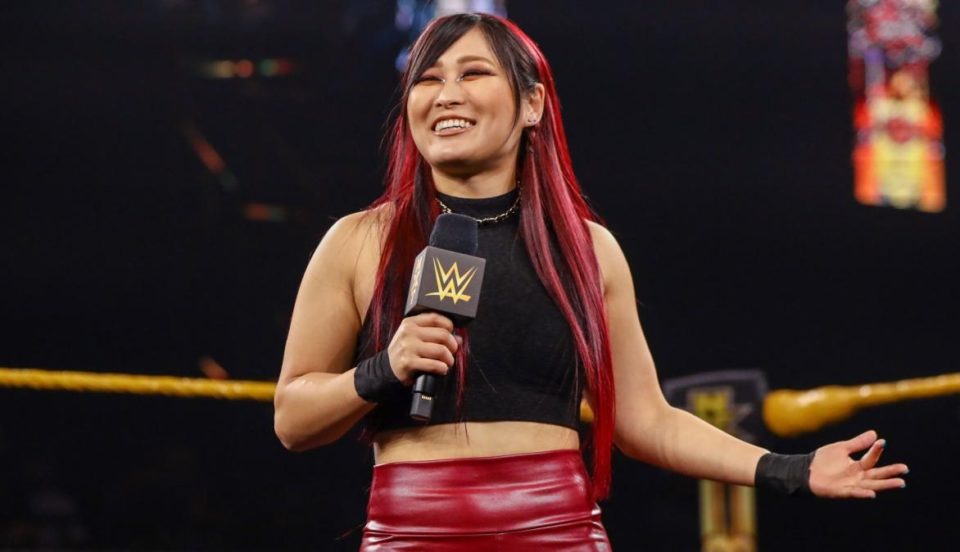 That must have hurt, Io Shirai not only lost the NXT Women’s Tag Team Championships, she also took a heavy hit against a ladder.

The WWE is taking a transition process in all its product wrestling, and one of the major changes in the NXT brand, which is used as a kind of talent development. NXT held its Halloween Havoc and Io Shirai event, suffered one of the strongest blows.

WWE wants a special NXT product, a riskier one, and a more adolescent audience, similar to the Attitude Era of the ’90s, which gave them a lot of success. That is why it allows some of its fighters to perform somewhat dangerous actions without risking their integrity.

Although it does not happen many times, some of these actions can go a bit out of the plan and look (in addition to feeling more painful) brutal. This happened with Io Shirai in Halloween Havoc. A three-team match with the NXT women’s tag team titles hung above the ring.

Io Shirai and Zoey Stark defended the championships against the team of Indi Hartwell and Persia Pirotta, in addition to the couple made up of Gigi Dolin and Jacy Jayne. This last team would come out with the victory and would become the new NXT tag team champions.

Inside the fight and before Gigi Dolin and Jacy Jane picked up the championships. Indi Hartwell was climbing a ladder to do it, she was interrupted by Io Shirai, who hit her to go down, and the Japanese climbed to the top to lower the championships.

But she did not count on Indi Hartwell taking the bottom of the ladder and dropping it onto another ladder located at the ring skirt and the commentary table. But the way Io Shirai fell was not the best of all, in fact, it seemed that she had suffered a serious injury.

What happened to Io Shirai after she fell on the ladder?

Fortunately for everyone, but mainly for Io Shirai, it was only the blow on the ladder and a bad fall, which did not happen to adults, and she herself would confirm it hours later on her Twitter account, in which she also sent a message for her health.

“I am not dead. I will always keep getting up to do my best. It is only sad that the title is not on my waist“, were the words of Io Shirai after the painful fall. And although her strength is not extreme fighting, in NXT, she has shown that she is not afraid of anything.

The last edition of NXT War Games was not only the first edition of the fight for women, but Io Shirai got a bit extreme again. With all the fighters in the ring, she climbed to the top of the fence, put a trash can on top of it, and jumped towards rivals and teammates.

This may not seem so risky to you, but it is an extremely dangerous move, because Io Shirai had no vision where she would fall, and a small mistake would have cost him more than a heavy blow.